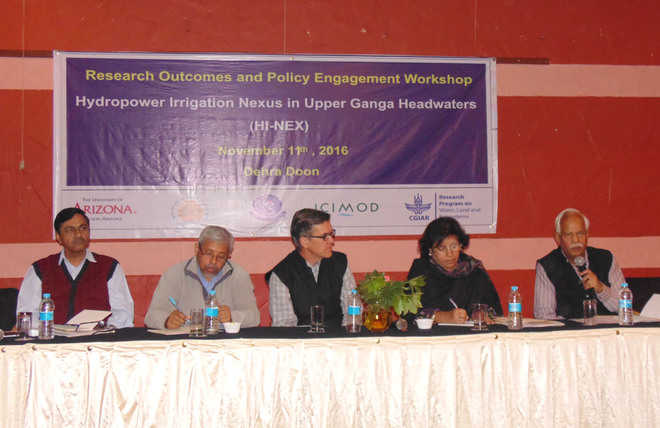 She addressed a workshop titled ‘hydropower irrigation nexus in upper Ganga headwaters’ organised jointly by University of Arizona, USA, People’s Science Institute, Dehradun, Shaheed Bhagat Singh College, University of Delhi, and ICIMOD. Shreshtha asserted that people were suspicious of hydropower projects and that was the reason even hydropower developers were also a frustrated lot.

University of Arizona Professor Dr Chris Scott presented an overview of the research project. He said social and environmental impacts from hydropower projects were often overlooked. “They have disproportionately greater impact on the marginalised populations, which is largely overlooked,” he said.

People’s Science Institute’s Director Dr Debashish Sen presented field data to show that the impact of the projects in the Bhilangana basin was greater on the slopes where tunnels or channels had been constructed to divert water from the river to the power house. “These effects include loss of irrigated land, decrease in agricultural productivity, drying of springs and increased hardships for women who gather resources for daily sustenance for their families and cattle,” Sen pointed out.

Former Uttarakhand Chief Secretary SK Das called for aggressive social mobilisation so that developers, government and the community can work together for hydropower development.

Manoj Kesharwani from Uttarakhand Jal Vidhyut Nigam Limited said the new state policy in 2015 for hydropower development in the state had increased the Local Area Development Fund from one per cent of the approved project cost to three per cent.