It is divisive politics all the way

The contesting narratives about the idea of India and Pakistan define the politics in Jammu and Kashmir. IN THE NAME OF VOTES: Emotional sloganeering pays off at polling booths AFP

The contesting narratives about the idea of India and Pakistan define the politics in Jammu and Kashmir. That, when translated in the current political lexicon, means the expansion of Hindutva forces versus the Islamic fundamentalism. This religiosity has provided political muscle to the parties, which would find their symbols on ballot machines in the upcoming elections. It is also decimating the urge of the masses for the needs of basic healthcare, education and functional and accountable governance in the state. The sloganeering for the special status of the state under Article 370 of the IPC versus the high-pitched Indian nationalism has pushed back the idea of a credible narrative that could serve as real-time solution to the conflict that has inflicted severe wounds on the physical and psychological landscape of the state.

Some serious voices, like that of IAS topper-turned-politician Shah Faesal, have started a campaign for injecting a sense of accountability. But he is up against so many vested interests that it seems unlikely that he would be able to overcome the barriers of religious extremism. The fear is that he may also land in the territory of extremism.

Sajad Gani Lone of the Jammu and Kashmir People’s Conference has embarked on the plank of “politics of change” but the colour of Kashmir politics is so well known that his attempts at “changing the politics of Kashmir forever” are seen against the backdrop of his perceived or real understanding with the BJP, the party that is not liked by many in the Valley, to put it mildly.

Given its diverse geographical and demographic makeup, Jammu and Kashmir’s political parties relish overzealous Hindu nationalism versus Muslim supremacist slogans of Kashmir-centric groups PDP and National Conference (NC). The PDP of Mehbooba Mufti has scores to settle with the BJP, which ditched her midstream when she was in power, halting her party’s agenda of going soft on militants and opening channels to Pakistan. Her party is quite loud in its criticism of the Hindutva forces, while the NC is maintaining the stance of Muslim victimhood in a slightly muted form. The objective of both the parties, however, is the same: to polarise the situation and dig political treasures out of such divisive politics. It also helps the BJP to secure its political ends in the Hindu majority parts of the Jammu region. That this perilous embrace of extremism will have dire consequences on the unity and integrity of the state is of no concern to any of these parties.

The NC and the PDP had boycotted the municipal elections last year claiming that they won’t contest elections until the picture on Article 35-A, granting special rights to permanent residents, is clear. They have no qualms in contesting the Assembly elections while the constitutional provision is still locked in a legal contest in the Supreme Court. Their definition of democracy starts and ends with the Assembly elections.

Much harm to the grassroots institutions has also been inflicted by the BJP, which boasts of having made inroads into Kashmir where it won seats (where there was no contest). It also failed to find candidates for nearly 100 seats in the Valley. Now it has pitched up the rhetoric of Indian nationalism that essentially talks of Hindu supremacy. It is also attacking parties like the NC and the PDP that plead for the involvement of Pakistan in solution-seeking exercise to the Kashmir issue.

Its claim that there was no terror attack in the past five years of its rule was ripped apart by terrorists on February 14 when a suicide bomber killed 40 CRPF troopers in Pulwama in South Kashmir. The Centre and the state have nothing in their kitty to claim terrorism-free place. Otherwise, too, this claim was hollow. J&K has so much evidence to contradict the boastful noises: Uri, Sunjwan, Udhampur and Nagrota fidayeen attacks to name a few.

Another claim that the surgical strikes of September 2016 have sent a strong message to Pakistan has been torn apart by this CRPF terror attack. The anti-terrorism profile that the BJP tried to don with the surgical strikes in election time may backfire. Until Thursday what was relatively relevant has come under close scrutiny and there are no convincing answers available to satisfy the people, angry over the loss of lives of soldiers.

There are divergent perspectives of Jammu, Ladakh and Kashmir having no convergence anywhere. “Make Pakistan a party in resolving the Kashmir issue,” the separatists argue, “Unless or until Pakistan is involved, there can be no dialogue on Kashmir.” Semi-mainstream-cum-semi-separatist parties like the PDP and the NC obediently follow this line as they think that it holds the promise of them getting votes in the name of religion and Kashmiri nationalism. The pro-Pakistan pitch helps them reinforce their Muslim identity and that of Kashmiri nationalism as well. Mehbooba Mufti puts it like this: “Without taking Pakistan on board, the search for peace and Kashmir solution would be an illusion.”

National Conference leaders Farooq Abdullah and Omar Abdullah are promising regional autonomy to all three regions, a matter that has its own appeal among some sections. However, clarity is missing as the party has not been able to spell out the meaning of regional autonomy and how far it could go to meet the governance demands of the people. Essentially, both the PDP and the NC are competing on the Kashmir turf. Seeking to expand their appeal in the Muslim-dominated parts of Rajouri-Poonch, and erstwhile Doda district, they want to separate these areas from the Hindu-dominated Jammu plains.

The BJP, which apprehends some competition from the Congress in the Jammu plains, is reselling the dream of Jammu Chief Minister, and that too, from the party, knowing that this is the only way to fudge the record of its non-performance when it ruled the state in partnership with the PDP. It is using the Hindutva card as much as the NC and the PDP in Kashmir are using the Muslim victimhood card.

Ladakh, a different region altogether, is being used by the BJP and Kashmiri-Muslim-centric parties by pitting Buddhist-dominated Leh versus Shia Muslim-majority Kargil district against each other after the state government created a new division for Ladakh with its headquarters in Leh on a permanent basis. It is divisive politics all the way. 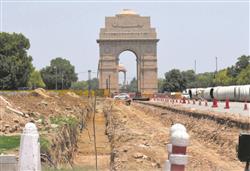