JHAJJAR: Deficient rainfall in this season has become a major cause of worry among farmers of the home district of Agriculture Minister Om Prakash Dhankar. 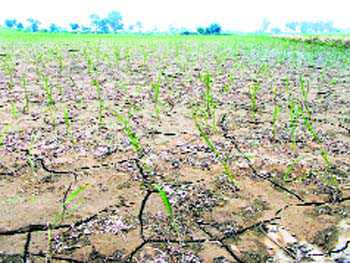 Deficient rainfall in this season has become a major cause of worry among farmers of the home district of Agriculture Minister Om Prakash Dhankar. The standing crops of bajra, paddy and guar have started drying up due to lack of water.

Farmers said they would suffer huge losses if the monsoon remained elusive in the coming days too. The Agriculture Department has predicted a decline of 15 to 20 per cent in the crop yield this season.

Sources said bajra was sown on more than 32,000 hectares, paddy 30,000 hectares and guar 5,000 hectares in the district. While June witnessed a rainfall of 57.2 mm, 95.6 mm of rainfall was recorded in July. August received less than the normal rainfall. The monsoon was still inactive this month.

“Farmers across Jhajjar district are badly affected due to poor monsoon. It pains to see the standing crops drying up. I may not be able to get back my input cost if it does not rain in the coming days,” said Om Singh, a farmer of Jondhi village.

Satish, another farmer, who has cultivated vegetable crops on more than 5 acres, said he was compelled to irrigate his fields from groundwater due to poor monsoon. Since the groundwater was not as much gainful as the rainwater to the crops, deficient rainfall would badly hit the production of vegetables this time.

The fear of losing the paddy crop to a large extent was looming large on the farmers due to a drought-like situation emerging in the region following poor monsoon. Unseasonal rain had earlier damaged their rabi crops and now the deficient rainfall had dashed the farmers’ hopes of getting profit from kharif crops, said Inderjit, who has cultivated paddy on more than 15 acres.

Dr Jagjit Singh, Subdivisional Agriculture Officer, said poor monsoon was definitely a cause of concern as farmers would lose the crop production up to 20 per cent if the situation remained the same in the coming days.