SRINAGAR: An increased change in land use, ranging from rampant deforestation to unplanned urbanisation and reckless use of agriculture chemicals, is deteriorating the water quality of the Jhelum in the Kashmir valley and costing its pristineness and shimmer. 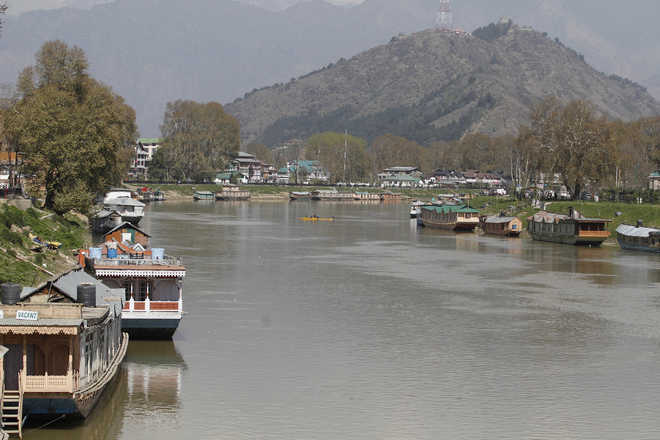 An increased change in land use, ranging from rampant deforestation to unplanned urbanisation and reckless use of agriculture chemicals, is deteriorating the water quality of the Jhelum in the Kashmir valley and costing its pristineness and shimmer.

A recent study by a team of researchers and the interviews with officials of the State Pollution Control Board reveal that the Jhelum’s water quality is facing a continuous challenge despite its “self-purifying capacity”.

The study, published in February this year and prepared by eight researchers of the Earth Sciences department of the University of Kashmir, assessed 15 water quality parameters at 12 sampling sites and concluded that the impact of large-scale urbanisation was evident from the “water chemistry analysis”.

The Jhelum is the main river in the Kashmir region. It has 24 tributaries that source it with water supply throughout the year. It has 24 catchment areas that are further subdivided into 60 sub-catchments. The river is initially formed by the junction of three streams, which rise at the south-east end of the Kashmir valley and traverse almost 150 miles from its source in Verinag in south Kashmir to Baramulla in north Kashmir, from where it flows into Pakistan.

The overflow of water in the river after several days of heavy rain in September 2014 had caused a devastating flood in the region, submerging hundreds of residential colonies and commercial neighbourhoods.

The study and the assessments provided by officials of the State Pollution Control Board point towards increased deforestation over the decades, reckless use of agriculture chemicals and domestic sewage as the major factors contributing to the deterioration of the river’s water quality.

The river’s water quality, which is categorised as Class A (meaning it is worth drinking without treatment) at its source at Verinag by the State Pollution Control Board and deteriorates to Class B (meaning it is safe for outdoor bathing only) all along the rest of it course in the region has also been found more polluted in the urban areas as compared to the rural settings.

“Urban areas were characterised with high concentration of nitrate, ammonia and phosphate levels...higher nutrient levels and low DO (dissolved oxygen) concentrations in urban areas reveal a clear human footprint on the water quality of the river Jhelum,” the study revealed.

The study, “Massive land system changes impact water quality of the Jhelum river in Kashmir Himalayas”, found that “drastic changes in water quality” of the river since the past three decades were manifested by increases in nitrate-nitrogen, total dissolved solids (TDS) and electric conductivity.

“Owing to the forest degradation in the catchment of the Jhelum, both TDS and conductivity values have gone up as more sediments and soil gets eroded into the streams,” said Irfan Rashid, Assistant Professor at the Earth Sciences Department and one of the several authors of the study.

Rashid said during their research, the team had found water quality parameters showing “significant variations” at all sampling sites. “It means there is something happening at a temporal scale and the surrounding environment…for example water from the agricultural catchment manifest more deterioration as compared to the forest catchment,” he said.

He said there was “reckless use of fertilisers and other chemicals” to boost the horticulture and agriculture productivity, which according to his earlier research in the Lidder catchment area, a tributary of the Jhelum, had increased from 24 kg per hectare of fertilisers in 1980s to 97 kg per hectare in 2008.

Two officials of the State Pollution Control Board, who requested not to be named, said the dumping of domestic sewage in the river remained a challenge for the river’s health, adding that pollution was the secondary problem while siltation caused by deforestation remained the “prime problem”.

“Our estimate is that the river’s carrying capacity has decreased to only 10 per cent of its original capacity and the siltation is a continuous process which requires remedial measures,” an official of the pollution board said.

He said there was a need to “tackle the problem at the root” by going for major afforestation drives in the river’s catchment areas.

The dumping of domestic sewage all along the river’s course from Verinag is an additional problem which is deteriorating the Jhelum’s water. “The main pollutant is domestic sewage. We do not have much industrial waste. In many towns and cities, the sewage is going directly into the river without getting treated,” another official said.

Officials of the State Pollution Control Board said installation of sewage treatment plants along the river’s course could regulate the pollutants in the river. “If domestic sewage increases with the increase in urbanisation, it will only degrade the water quality further,” the official said.