Kingdom that Mughals could never win : The Tribune India

Kingdom that Mughals could never win

MUSSOORIE: Tehri Garhwal district is often described as the land of celestial beauty. It has towns such as Pratap Nagar, Kirtinagar and Narendar Nagar that were founded by kings and New Tehri town are worth seeing for their serene beauty. 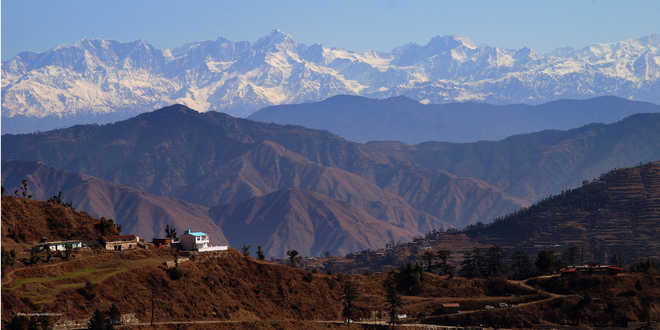 The Himalayan ranges as visible from Suwakholi, near Dhanaulti, depict the serene beauty of Uttarakhand. Photo courtesy: Bhumesh Bharti

Tehri Garhwal district is often described as the land of celestial beauty. It has towns such as Pratap Nagar, Kirtinagar and Narendar Nagar that were founded by kings and New Tehri town are worth seeing for their serene beauty.

The history of Garhwal is older than that of the Ramayana and Mahabharata. The worship of Lord Shiva is predominant in this region.

Historically, Garhwal is believed to be the land where the Vedas and the Shastras were composed and the great epic Mahabharata was written.

Kanak Pal was the first ruler of the state of Garhwal in 823 AD. He came from what is now called Dhara Najari in Dhar. The rulers of Garhwal gradually expanded their kingdom and power. In fact, Garhwal was one of the independent kingdoms on which the mighty Mughals of Delhi had neither influence nor supremacy. The kings of Garhwal remained independent and were able to retain their diplomatic presence to some extent from the rule of Mughal emperors who swept the northern plains of India. However, there have been a few skirmishes with the Mughals for various reasons and they changed the course of the history of the region. The relationship between the Mughal rulers and the Garhwal kings was believed to be cordial, barring a few incidents from time to time.

One famous instance mentioned in the annals of the history of Garhwal is of Rani Karnavati (also famous as Nak kati Rani), wife of Mahipati Shah. Karnavati is known to have cut the noses of Mughal soldiers who attacked Garhwal. She ascended to the throne in 1622 after the death of her husband and ruled the kingdom on behalf of his son Prithvi Pat Shah, according to some historians.

Karnavati repelled the attack of the army of Mughal emperor Shah Jahan that was led by his chieftain Najabat Khan around 1,640. She is known to have cut the noses of the Mughal soldiers at a battle that took place near Srinagar, forcing Najabat Khan to retreat. Shah Jahan infuriated by this loss removed Najabat Khan from the post of Jagirdar and appointed Mirja Khan in his place. The monuments erected by Karnavati existed at Nawada in Dehradun district but gradually phased out due to government apathy. She is also credited with the construction of the Rajpur canal that starts from the Rispana river and supplies water to the Doon valley. It is believed that Karnavati had built present Karanpur.

The instances of King Shyam Shah visiting Agra for meeting Mughal emperor Jahangir are also recorded in the history of Garhwal. However, this did not mean that the Garhwal kingdom was part of the Mughal empire.

Mahipati Shah also did not have good terms with the Mughals but he did attend the crowning of Shah Jahan as Mughal emperor in 1628. Prithvi Pat Shah too while assuming the throne did not treat well the envoy sent by Shah Jahan to the Garhwal King court. Shah Jahan after hearing about the insult of the Mughal envoy ordered his commander Meer Mughal to capture the Garhwal king and bring him to the Mughal court.

Prithvi Pat Shah faced by regular Mughal attacks sent several letters to Jahanara Begum, daughter of Shah Jahan, and requested her to involve Dara Shikoh in establishing some sort of truce with Shah Jahan. Dara Shikoh assured Prithvi Pat Shah of helping him. He did convince Shah Jahan to pardon the Garhwal king, leading to a treaty with Garhwal. Medani Shah, son of Prithvi Pat Shah, was sent to Delhi where he met Shah Jahan and offered him gold coins.

Another interaction of Garhwal kings with the Mughals occurred after Shah Jahan was taken ill in 1657. Shah Jahan declared Dara Shikoh as his heir but other sons, namely Shah Suja, Murad and Aurangzeb, who all wanted to sit on the throne of Delhi, did not like it. Aurangzeb put his father and brother Murad in prison and declared himself the emperor of India. He sent a battalion to Lahore to capture Dara Shikoh. Suleman  Shikoh, son of Dara Shikoh, who was in Allahabad, came to know about Aurangzeb’s intentions and on the advice of King Jai Singh, who was his local guardian, marched towards Srinagar in Parui Garhwal. Though King Jai Singh deceived him on the way, Suleman still made it to Srinagar. Aurangzeb on learning about Suleman’s whereabouts threatened the Garhwal king to hand over him or he would capture Pataldun or Bhabhar.

Medni Shah, fearful of Aurangzeb, is believed to have handed over Suleman to the Mughal army. Suleman saddened by the whole episode cursed the Garhwal king that his kingdom would be ruined very shortly.

The Pal rulers later came to be known as Shahs, the title that a Mughal ruler gave them out of gratitude. There is an interesting story about how they got the Shah title in the first place. Historian Pandit Harikrishan Raturi states in his book “Garhwal ka Itihas” that Balbhadra Pal was known for his massive physical strength. Once he was on a hunting trip in the forest of Bhabhar, near Najibabad, and there he met the emperor of Delhi who was also hunting. One day when both were hunting together, Balbhadra Pal saved the emperor from a tiger attack by fighting the animal single-handedly. The emperor impressed by his valour took him to his palace in Delhi and extended his hospitality to him for several days. Some rogue fighters were harassing the emperor in the hills in the northeast of the country. Balbhadra finding the emperor tense over the issue offered his services in silencing the rogue elements, to which the latter agreed. Balbhadra with his Garhwali army defeated the rogue elements and killed their leaders.

Balbhadra thus brought peace on the border and got a consent letter signed by the rogue elements that they would never attack the emperor’s territory again. The emperor pleased with the outcome granted Balbhadra the title of Shah and also changed his name to Bahadur Shah. Subsequently, Balbhadra's successors started using the title Shah. Maharaja Mahipati Shah was another famous ruler who was strong enough to attack the Mughals and mount a punitive expedition into Tibet. Maharaja Lalit Shah was able to subdue their old enemy by invading and conquering Kumaon. He expelled the Chands and presented the throne to his younger son. But his sons quarrelled with each other and brought ruin upon themselves.