REWARI: The Integrated Multi-Modal Logistic Hub project, for which the land acquisition process was dropped last month, was mired in controversy from the word go. 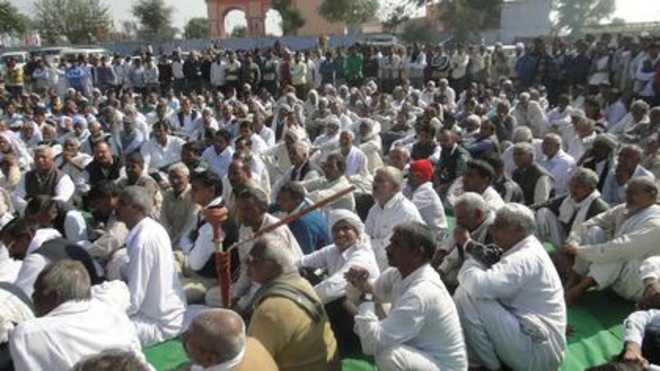 Farmers during a panchayat against land acquisition in Rewari. File photo

The Integrated Multi-Modal Logistic Hub project, for which the land acquisition process was dropped last month, was mired in controversy from the word go.

Farmers had refused to part with their land when the previous Congress government started acquiring land for the project in 2011. It was to be developed as part of the Delhi-Mumbai Industrial Corridor over 3,664 acres in the Bawal Assembly segment.

Tension over land acquisition reached a flashpoint when more than 60 persons, including 40 police personnel, were injured in a clash between farmers and the police during a mahapanchayat at Aasalvaas village on July 22, 2012.

Taking note of the violence, then government led by Bhupinder Singh Hooda formed the Justice (retd) Iqbal Singh commission to investigate into the incident and constituted a government committee headed by then Industries Minister Randeep Surjewala to find a solution to the problem. Besides, the government put on hold the acquisition process.

In August 2013, the Justice Iqbal commission submitted its report, wherein it said violence appeared to be the handiwork of “outsiders” who misled farmers.

In the meantime, some farmers moved the High Court against the land acquisition and they got a stay on the process in June 2014. Later, the HC vacated the stay while disposing of a petition filed by nearly 40 farmers, pleading that they wanted to give their land for the project. The stay was not vacated on land of those farmers who opposed land acquisition and were applicants in the earlier case.

Since the stay was vacated, the state government resumed the land acquisition process, prompting farmers to restart their agitation. This time, the farmers demanded that land be acquired as per the new Land Acquisition Act that had the provision of double multiplication factor of floor rate/market value of acquired land with 100 per cent solatium in a rustic area.

Significantly, the BJP had at that time supported the farmers and promised them of not acquiring their land if it came to power in Haryana. Things changed when the party assumed power. It continued with the land acquisition process by serving notices under Section 9 of the Act on November 7, 2014.

“The BJP government announced the award for land on December 4, but the multiplication factor for rural areas supposed to be 2 was calculated at 1. Solatium paid to farmers was also cut from 100 per cent to 30 per cent by changing the provisions of the Act. Consequently, the interest over compensation reduced,” said Nihal Singh of Bolni village. His 7 acres were acquired for the project.

He claimed that the reduction in the multiplication factor and solatium caused a loss of 170 per cent to farmers. “This made the farmers demand at least Rs2 crore per acre as compensation. The state government announced the compensation in the range of Rs40 lakh to Rs1.65 crore.”

When the farmers could not be persuaded to accept compensation less than Rs2 crore, Chief Minister Manohar Lal Khattar formed a review committee headed by Finance Minister Capt Abhimanyu to find a solution.

Finally, the government caved in and dropped the project succumbing on December 23, 2014.

What was the project