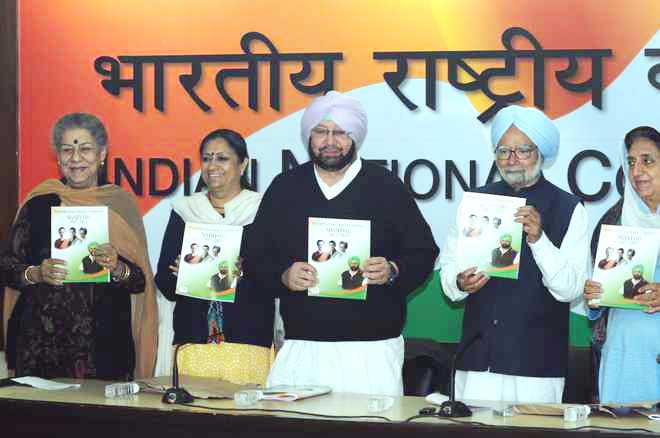 Blaming 10 years of Akali-BJP rule for the current economic mess in Punjab, Singh described the state manifesto of Congress as a forward-looking, visionary document that will help put the state back on track.

Releasing the manifesto in the presence of Amarinder Singh, Ambika Soni and AICC Punjab in charge Asha Kumari here, the former prime minister said: “Punjab is a state with potential, but this potential was not utilised in the last 10 years.

The people of Punjab need a better tomorrow in terms of agriculture and manufacturing. Captain sahab’s leadership is badly needed by the state. I sincerely believe that under the leadership of Capt Amrinder Singh, we will undo the damage done to Punjab in 10 years. People of the state will have higher per capita income and better infrastructure and agriculture growth. “

”We took six months to prepare the manifesto. We have gone through villages and reached out to the people. In Punjab we have Rs 5 crore deficit in budget. To tide over all this we have come with programmes for people from every walk of life. Rural debts are Rs 67 000 crore.We will  negotiate with the banks so farmers don’t have to pay, “ Amarinder Singh said.

He referred to Congress ‘ Ghar Ghar main Naukri’ plan to target 90 lakh new voters this time in the age group 18-35 years. The Congress has also promised Rs 2,500 stipend to unemployed youth registered in the state till they get jobs.

”We will stop drugs in four weeks’ time, create an industrial pool, offer 33 pc reservation for women in government and contractual jobs, “Amarinder Singh said adding that he will keep all the promises.

He also mentioned the creation of Guardians of Governance department in the CMO and ex-servicemen will be overseeing progress of schemes for veterans.

Among other sops Congress offered to end 10 year exile in Punjab is free smart phones for students.

—No travel for CM in state helicopter

—No state banquet to anyone, except foreign dignitaries

—One job for every household

—Police and political nexuses would be broken

—Teachers for teaching only, no other duty

—Free textbooks to all students, books would be available online also

—Electricity tariff for industry pegged at Rs 5 for five years

—No advance tax, no imprisonment for traders in tax cases

—33 per cent reservation in all housing schemes

—50 per cent jobs to Punjab residents in industry

—Free education for girls from Class 1 till PhD

—State kitchen to provide meal at Rs 5 per head

— Punjab river water for people of the state only: No new canal construction, including SYL, to be allowed.

— Employment generation: Shaheed Bhagat Singh Employment Generation scheme for youth, unemployment allowance of Rs 2,500 per month till job provided to those registered with the bureaus.