Myth of the Ugly Indian

East Asian hotels and resorts, especially in Singapore, Malaysia, Thailand and Vietnam, have a despicable practice of not letting a guest leave until the room has been gone through with a toothcomb. 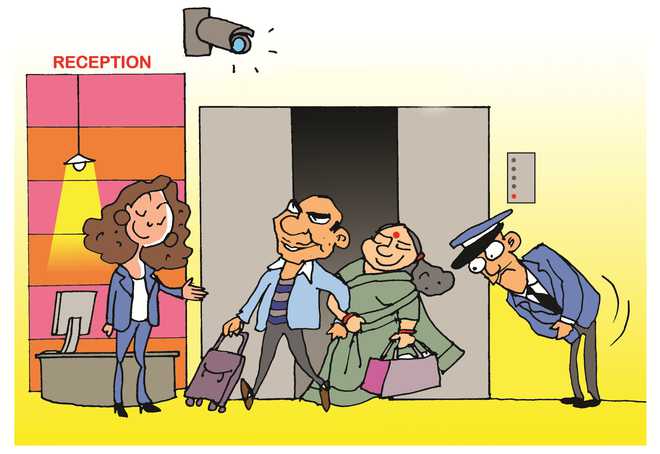 East Asian hotels and resorts, especially in Singapore, Malaysia, Thailand and Vietnam, have a despicable practice of not letting a guest leave until the room has been gone through with a toothcomb. A lot of hotels in Europe are also behaving like those in East Asia, especially when it comes to Indians. In parts of Europe, there are hotels that discourage Indians while a few keep a separate section for Indians

In an age when all things American are aspirational and to be American is the ultimate, to be tagged as “The Ugly Indian” akin to “The Ugly American” might well be considered a compliment by millions of Indians.

The question is does “The Ugly Indian” exist and if so, who is he? Is he the Indian tourist who, like the Ugly American, is perceived to be ignorant, inconsiderate, arrogant, loud and grabby? Is he the Indian official — brash, insensitive and big brotherly — swaggering about the neighbourhood and imposing on smaller neighbours? Or, is he the loaded businessman who enters the first-class section of a flight or a hotel noisily talking on his phone, flashing branded accessories that suggest more money than taste?

To many, the Ugly Indian would be the Indian official who rushes to Kathmandu a day before Nepal is set to promulgate its constitution and demands that it be put off until the changes that New Delhi wants are incorporated. Equally, the Ugly Indian would be the Indian television crew which landed in Nepal after the earthquake and felt that the country and its people owed them precedence over rescue and relief operations, and who were rightly asked by the authorities to pack up and leave. Similarly, the Indian Peace Keeping Force (IPKF) personified the Ugly Indian in Sri Lanka. Indians who look down on their “smaller” neighbours or see themselves as superior or more representative of South Asia and generally behave like the Ugly American does in his backyard or pre-revolutionary Cuba certainly deserve to be categorised as the Ugly Indian.

There is nothing ugly as such about an Indian tourist packing in items of toiletry and stuff from his hotel room; or taking away items of cutlery, mini wine bottles and the toilet kit from a flight. This has become a big issue after a video of the items from a hotel room being rooted out of a tourist’s bags went viral on social media. In this case, those who filmed and those who allowed the filming of the search, recovery and deliberate humiliation of the occupants while they were checking out of the hotel are the ugly villains.

The hotel had a right to recover what the tourists are not allowed to take away from the rooms. But who gave them the right to film and publicly humiliate them through the video widely seen the world over? After all, many a tourist is often molested and sometimes even sexually assaulted in these hotels by their staff, but more often than not, these hotels are often obliged by the authorities and the media with their names not being made public. By the same token, the hotel had a right to recover what should not be taken away from the rooms, but they had no right to humiliate and damage the reputation of the persons involved. After all, they were not criminals.

In fact, those who were held up to public ridicule in this case deserve our sympathy.

It is the low self-esteem of the Indians that make them assume that such practices are indulged in only by their countrymen and not others. As far as I have seen it, Indians do it as much as others, perhaps less, but the “white folks” get away with a lot that the browns and the blacks would be hauled up for. Racial prejudice, which is also internalised by Indian staff, at entry points like airports, customs and security besides hotels, restaurants and tourist attractions abroad, is only a part of the reason for this biased perception and actions. There are other complex and cultural factors involved. Those at the policing or persecuting end are not blameless.

East Asian hotels and resorts, especially in Singapore, Malaysia, Thailand and Vietnam, have a despicable practice of not letting a guest leave until the room has been gone through with a toothcomb. On enquiry once, in Malaysia, I was told “Indians take away things”. In that case, why have you held back so many westerners too, I asked. The staff merely smiled. This happened on a FAM trip, meant for promoting these properties. That was my first and last FAM tour. On another trip, I was asked to pay for a broken strip of plastic “Do not disturb” sign — which I hadn’t even seen. “But it was in your room”, the staff argued. On a visit to Vietnam, one visitor had to pay for a broken glass table-top.

I have not had the “East Asian experience” of hotels in Europe, US, China and Central Asia. They only ask if I have used the mini bar — but never actually hold you up while checking the truth of your statement, like it’s done in East Asia. However, people tell me that a lot of hotels in Europe are also behaving like those in East Asia, especially when it comes to Indians. In parts of Europe, I am told there are hotels that discourage Indians while a few keep a separate section for Indians.

Often Indians, like other tourists, do not know what can be taken away and what cannot. I have asked hotels in China and Europe how they cope with this practice — after all, every guest cannot be treated like a kleptomaniac or thief (like in East Asia). The bigger and better ones have price tags on objects in the room and label takeaway items as ‘complimentary’.  Other hotels put up a list in the room with the price of items, including glasses and hairdryers. Does that work? Yes, say staff in Chinese hotels where I came across this. In north Europe, a few hotels prominently showcase items in the room with a notice “If you want to buy these items, contact reception”.

On one of my trips, I saw economy passengers pick up the overnight pouch or toilet kit left behind in business class. The cabin crew nodded (okay) when they caught a person doing it. Most of the ‘pickers’ were young and white. When an older Indian lady picked up a pouch, she was told “No”.  Feeling bloody-minded, I picked up two pouches from different seats. Frowning, the stewardess said, “You can take one”.  Smiling wickedly, I replied, “One is for the lady you snubbed”. She could only grimace.

Airlines that do not offer miniature bottles of wine and spirit in cattle class is fine because there are too many passengers. But, do those in business and first class need this freebie?

The tourist who wants to bring back baubles and hotel-airline freebies as mementos of foreign travel is disappearing. The new-generation tourist is the millennial, and they are anything but ‘The Ugly Indian”— at least when abroad.

They travel not to pick up things, but to gather experiences and capture what they can of these in their cameras. The new jetsetters are seekers, explorers and adventurers. An estimated 60 per cent of Indian millennials holiday two to five times a year, gathering experiences as if they are the building blocks of their life.  They travel extensively and rough it out, not necessarily to save money. Although they can afford luxury hotels, they prefer bed-and-breakfast joints. Their halts are like pit stops, pauses to recharge before resuming the journey which is, often, not about arrival or destination. The most I have seen them pick up and put in their bags is some fruit from the breakfast buffet.

They are no different when they travel on work. They travel light and are averse to carrying stuff. The other day in the Delhi-Chandigarh Shatabdi executive class were a group of young corporates headed for a working retreat. The team leader kept them occupied with discussions of business ethics and principles. On reaching Chandigarh, he told them: “Don’t leave behind your bottles of water or any unfinished food in packets. We’ve paid for it. Pick it up and carry it with you”. They looked around sheepishly at being thus exposed. But as dutiful employees, did what they were told.

The Indian tourist abroad — regardless of the lurid tales that periodically surface and make us wonder if “we are like that only”— is no longer the Ugly Indian we are afraid to be. Chances are the Ugly Indian is here at home, perhaps, next door.