Painting India as it was

Many amateur and professional artists were introduced to the landscapes of China and India, thanks to the maritime engagements of the East India Company and then the British Empire. 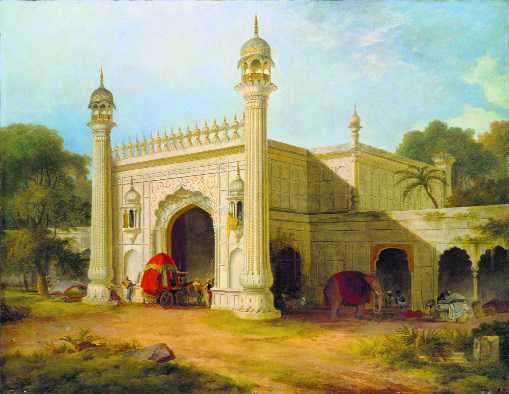 Many amateur and professional artists were introduced to the landscapes of China and India, thanks to the maritime engagements of the East India Company and then the British Empire. Some artists took the plunge in search of wealth, while others were driven by the spirit of adventure and scientific exploration.

Prominent among these travelling landscape artists were Thomas Daniell (1749-1840) and William Daniel (1769-1840), the uncle-nephew duo. They travelled extensively in India between 1786 and 1793, recreating topographical scenery of the land, commissioned by the seafaring Europeans. On their return to Britain, they produced many paintings, drawings and prints based on the sketches they had made while travelling. The aquatints, collectively christened as the Oriental Scenery, showed the colonial Indian architecture and landscape of that time as never before.

The artists started their Indian sojourn from Calcutta, and reached Delhi via the Gangetic Plain.  Then, they moved up into the hills of Garhwal, back to Kolkata via Lucknow, and then to Madras, and finally to Bombay to explore the rock cut temples of western India. They comprehensively captured the terrain of India of that time — barren lands, mountains, forests hills, rivers and even waterfalls such as the Dhuah Kund, boulders of Sultanganj, grand architectural monuments, mosques, tombs and temples, and everyday village life.

These aquatints were issued in pairs, between March 1795 and December 1808. In an exhibition titled Oriental Scenery: Aquatints of India by Thomas Daniell and William Daniell, curated by art historian Giles Tillotson, 144 prints are currently on display at Drishyakala, a collaboration between the Archaeological survey of India (ASI) and Delhi Art Gallery (DAG), Barrack No.4, at the iconic Red Fort in New Delhi.

There were many other artists who travelled to India before the Daniell duo; the most prominent being William Hodges. So how is the duo’s vision of the topography different from that of Hodges? Nicholas Lambourn, Senior Director, Head of Department, Topographical Pictures at Christie’s, sheds light on the differentiator. “Hodges painted a rather romantic, almost mystical view of the East, of India. He travelled at a time when India was a sort of private, barely-seen, dominion of the East India Company. Whereas, the Daniells came at a time when India was becoming a possession of the Crown. Their art reflects that they were topographical artists, and they literally measured the landscape, walking around with a perambulator. They started their paintings by making tracings and camera obscuras of the mosques and temples. So their work is a literal, topographical representation,” he said.

“The aesthetic is quite different from that of Hodges, who was more a theatrical painter. The Daniells’ vision of the landscape is more prosaic and objective. They don’t impose themselves on their legacy. It is a literal record of India as it was then – of some great architectural sites and landscapes.”

As far as art collectors are concerned, Lambourn considers it a lively market, catering mainly to the 20th century art.  But he believes there’s no reason why new collectors shouldn’t be made aware of the 18th century art. Itinerant artists in the18th century, as also before and after that, made a living from travelling. Some were part of official expeditions or voyages that set off from Europe. Others were employed with the British establishments in other capacities. Though there are many others artists who travelled to India after the Daniells, but none could match their artistic ambitions. The scale and the precision of their artistic vision of India remain unmatched to date.