Post-op probe continues to be tardy : The Tribune India

Post-op probe continues to be tardy

CHANDIGARH: After killing the terrorists responsible for the Dinanagar terror attack and the recovery of two Global Positioning System devices (GPS) from them, the focus shifted to where the terrorists came from and how they entered the country. 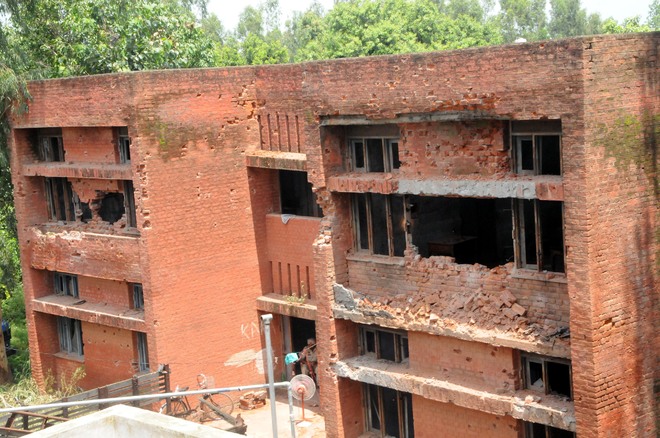 The building that terrorists had occupied at Dinanagar. Tribune photo: Vishal kumar

After killing the terrorists responsible for the Dinanagar terror attack and the recovery of two Global Positioning System devices (GPS) from them, the focus shifted to where the terrorists came from and how they entered the country.

A post-operation investigation was launched to establish the route that they possibly took from Pakistan and to ascertain if they were Jihadis.

The last word on all that is yet to be spoken. This investigation has generated another major controversy about the whole operation.

The Punjab Police, through a media leak to a newspaper, claimed on the first day that the terrorists were circumcised and had shaved their body neck down like the Jihadis.

Three days later, the police claimed that doctors found a glove on one hand of the terrorists. The glove carried a marking "Made in Pakistan".

This claim raised enough heat. It is being questioned as to why the police did not find the glove on first day when they conducted a body search.

How did the police miss the glove when they had removed all clothes to see the shaving and the circumcision? A senior police official has given an explanation that the glove had somehow got glued tightly to the hand and could be removed only by the doctors.

The marking "Made in Pakistan" and the GPS coordinates are evidence enough with the Indian Government to take up the matter with Pakistan on why and how the three terrorists came to India from its soil.

However, the security agencies have failed to piece together a final report on the route taken by the terrorists based on the coordinates fed into the two GPS devices seized from the terrorists.

The number of terrorists and when they infiltrated into India are also subjects of controversy. The Punjab Police has two theories while the BSF, Army and the Intelligence Bureau have their own too.

Ten days have passed and all these security agencies are yet to arrive at a final conclusion.

The Punjab Police believe the terrorists infiltrated from Fatto Chak (Pakistan) to Mastgarh (India) in the Dorangla area on the international border. The day of infiltration is not known.

There are claims that they entered on July 21 when the intelligence agencies first issued an alert or July 25 as suggested by a GPS coordinate or on the night of the attack itself. The security agencies have yet not cleared the dust on the exact day, time and the route.

The BSF has so far not concluded whether the terrorists infiltrated or not and from where. BSF sources said there was a theory that the terrorists may have entered via the Ujh river -- using underwater means -- near Tash post of the BSF at Paharipur, Punjab, and crossed the Ravi river to enter Dinanagar.

"But the current of the Ravi is very strong and has a depth of 20 ft during this time of the year. And it would take at least five hours to reach Dinanagar by this route," said sources.

BSF IG, Punjab Frontiers, Anil Paliwal, said they have not come across any indication of any cross-border movement along the Punjab border.

"I am neither confirming nor denying as to whether the terrorists used the border route. So far, we do not have any evidence with us to conclude their entry point if any. None of our night-vision cameras have recorded any movement. We have checked and rechecked along the entire length of the border."

BSF sources responding to theories about infiltration via the Ravi or other seasonal rivulets acknowledged that the riverine stretch was not fully covered.

Sources in the BSF have said that cobra fencing had been fixed via levers and pulleys atop the water surface at many places wherever possible. "There is no cobra fencing under the water. We do not, however, have any means to check if the terrorists used any underwater carriers.  "But the use of such means of transport has been unheard of. Even during Mumbai attack, they used surface boats only," they opine.

On the other hand, sources in the Indian Army and intelligence agencies said that the GPS coordinates of the terrorists showed that they were at Shakargarh Bulge in Pakistan, they infiltrated into Jammu and entered the Narot Jaimal Singh Village in Gurdaspur.