CHANDIGARH: Punjab will request the Supreme Court to first decide on the ‘riparian status’ of Haryana and Rajasthan before it gives a verdict on the Presidential reference on the Punjab Termination of Agreements Act, 2004. 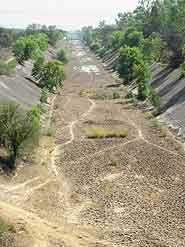 Punjab will request the Supreme Court to first decide on the ‘riparian status’ of Haryana and Rajasthan before it gives a verdict on the Presidential reference on the Punjab Termination of Agreements Act, 2004.

The Act had sealed the fate of the Sutlej-Yamuna Link (SYL) canal. Punjab will seek a decision on a plea pending in the SC that had challenged distribution of river waters mandated under the Punjab Re-organisation Act 1966. Punjab had moved the petition under Article 131 of the Constitution, asking the SC to adjudicate if Haryana and Rajasthan are ‘riparian states’. Section 78 of the 1966 Act had allowed distribution of water to successor states (Haryana and Rajasthan).

Punjab will request the SC that the Presidential reference on the 2004 Act be decided only after its claims challenging the allocation of waters under the Re-organisation Act are addressed, sources confirmed to The Tribune.

Punjab is objecting to Sub-section 3 of Section 78 of the Re-organisation Act. This had allowed “rights to Haryana and Rajasthan to receive and utilise water available for distribution as a result of projects on the rivers in Punjab.”

The Termination of Agreements Act had come about after the SC passed an order on the construction of the SYL canal in June 2004.

This Act annuls the December 31, 1981, agreement between Punjab, Haryana and Rajasthan, signed by the three Chief Ministers concerned in the presence of the then Prime Minister Indira Gandhi, and also all other agreements relating to waters of the Ravi and Beas. However, the termination of agreements protects current utilisation and allocation of water by neighbouring states through existing canal systems. It has only scuttled the SYL.

Sources said Punjab would be praying that all matters on the subject be clubbed as the Presidential reference on the 2004 Act could not be seen in isolation, arguing that the principle on which Haryana and Rajasthan had been allocated waters was incorrect.