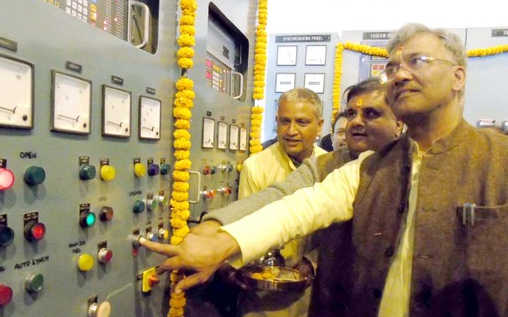 He said that the project on Kalpganga river would prove to be a milestone for development of this mountainous region. He further said that the power generated from this project would enhance electricity supply in 25 villages of the neighboring areas like Bharki, Bheta, Urgam, Chai-Thai, Salana, Joshimath and Badganv and also give employment to local unemployed youth.

Urgam Hydro Power Project was damaged in the 2013 natural calamity. Uttarakhand State Government provided Rs 13.05 crore for the reconstruction of the damaged project. The power project had stopped producing electricity due to floods of 2013 which had damaged head curves, power duct, power house, TRC and about 100 meters of water canal.

The Chief Minister also visited the hospital operated by Swami Vivekanand Charitable Trust in Pipalkoti on Friday. He said this hospital would be beneficial in providing health facilities to pilgrims during Chardham Yatra and also to local people.