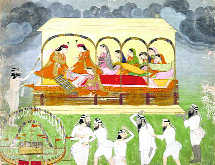 Maharaja Ranjit Singh died of paralysis at Lahore on June 27, 1839, and was cremated on June 28, 1839. Four of the Maharaja’s Ranis and seven of his slave girls followed the practice of sati and burnt themselves on his funeral pyre. This happened despite the fact that the Sikh Gurus had condemned and denounced the man-made notion of the inferiority of women and protested against their long subjugation.

Guru Nanak Dev argued for the equality of women with men in the following words: “Man is born from a woman; within woman, man is conceived; to a woman he is engaged and married. Woman becomes his friend; through woman the future generations come. When his woman dies, he seeks another woman to whom he is bound. So why call her bad? From her kings are born. From woman, woman is born; without woman there would be no one at all.” (Guru Granth Sahib, page 473)

Guru Amar Dass condemned the practice of women burning themselves on their husband’s funeral pyre in the following words: “They cannot be called satis who burn themselves with their dead husbands. They can only be called satis if they bear the shock of separation. They may also be known as satis who live with character and contentment and always show veneration to their husbands by remembering them.” (Guru Granth Sahib, page 787)

According to Anant S. Altekar, the author of  The Position of Women in Hindu Civilisation from Prehistoric Times to the Present Day, the average Rajput princess welcomed the opportunity to become a sati and will not allow her husband to be cremated alone. According to him, their number was sometimes appallingly large. For example, when Raja Ajit Singh of Marwar died in 1724, 64 women mounted his funeral pyre. Altekar states that when Sikhs became a fighting community, they did not like to lag behind the Rajputs in following time-honoured martial traditions and sati custom became common in Sikh aristocracy in spite of its condemnation by the Gurus.

Out of the four Ranis who burnt themselves on the funeral pyre of Maharaja Ranjit Singh, two belonged to Rajput families. Rani Mehtab Devi was the daughter of Raja Sansar Chand of Kangra, who was a Katoch Rajput (her sister Rani Raj Banso was also married to Maharaja Ranjit Singh and died in 1835). Rani Har Devi was the daughter of Chaudhari Ram, a Salaria Rajput of Atalgarh, which now falls in Gurdaspur district. Their Rajput pride made them perform the supreme act of sati custom.

Lt Col Steinbach, one of the many European adventurers who secured employment under Maharaja Ranjit Singh, had watched the funeral ceremony of the Maharaja and his observations recorded in his book The Punjab, Being a Brief Account of the Country of the Sikhs, published in 1946, are worth going through. “The funeral obsequies of this extraordinary man were too remarkable not to be mentioned here. Upon his death being made public, the whole of the Sikh Sirdars at Lahore assembled to do honour  to his suttee, and four of his favourite queens, together with seven female slaves, having, in conformity with the horrible practice of the country, expressed their intention of burning themselves upon the funeral pyre, preparations were immediately made for the solemnity. It is said that much dissuasion is exercised in cases of suttee; ostensibly such may be the case; but in private every argument to the contrary is made use of by the relatives of the wretched victim, and the promise once given cannot be retracted. A street of a double line of infantry having been formed, the procession proceeded at a slow pace to its destination, only a quarter of a mile distant, and within the precincts of the palace. The corpse of the late Maharaja, placed upon a splendidly gilt car, constructed in the form of a ship, with sails of gilt cloth to waft him (according to native superstition) into paradise, was borne upon the shoulders of soldiers, preceded by a body of native musicians, playing their wild and melancholy airs. His four queens, dressed in their most sumptuous apparel, then followed, each in a separate  gilt chair, borne upon the shoulders of their attendants; the female slaves following on foot. Before each of the queens was carried a large mirror, and gilt parasol, the emblems of their rank. After them came the successor to the throne, the Maharaja Kurruck Singh, attended by the whole of the Sikh Sirdara, barefooted, and clothed in white; none but persons of noble rank permitted to join the procession. To the last moment of this terrible sacrifice, the queens exhibited the most perfect equanimity; far from evincing any dread of the terrible death which awaited them, they appeared in a high state of excitement, and ascended the funeral pile with alacrity. The slaves also appeared perfectly resigned, but less enthusiastic. The body of the Maharaja having been placed upon the pile, his queens seated themselves around it, when the whole were covered over a canopy of the most costly Kashmiri shawls. The Maharaja Kurruck Singh then taking a lighted torch in hand pronounced a short prayer, set fire to the pile, and in an instant the whole mass, being composed of very ignitable material, was in flames. The noise from the drums and shouts of the spectators immediately drowned any exclamation from the wretched victims.”

Dr Honigberger, author of Thirty-five Years in the East, was a court physician of Maharaja Ranjit Singh. Being a personal witness of this melancholy scene, he wrote in his book: “Perhaps our hearts throbbed more at the view of the dismal train, than those of the poor victims themselves.”

As soon as the news of the Rajput Rani Mehtab Devi’s sacrifice reached Kangra, her Rajput heroism thrilled the family and in due course the scene was commemorated in a painting, which is in the collection of the British Museum, London. According to WG Archer, the author of Paintings of the Sikhs, this painting was obviously painted by a Kangra artist from hearsay for while certain details are correct, others do not tally. In the left hand corner is a bier shaped like a ship but with flags and no sails. The corpse is laid on a long cot surmounted by a structure like a white pavilion. Four Ranis and seven slave girls are grouped about it, but of these only two are clearly Ranis. Yet, its very existence shows the intense interest with which members of the Kangra house regarded developments at the Sikh court.

(The writer is a noted Sikh art historian)