So, who’s scared of the glass cliff

Every Women''s Day, we eulogize women and extol them to the skies. These are the women who have beaten all odds and pushed the envelope a bit further. This year, let''s take a step further, and see what lies beyond and behind the cozy C-suites and the corner offices. 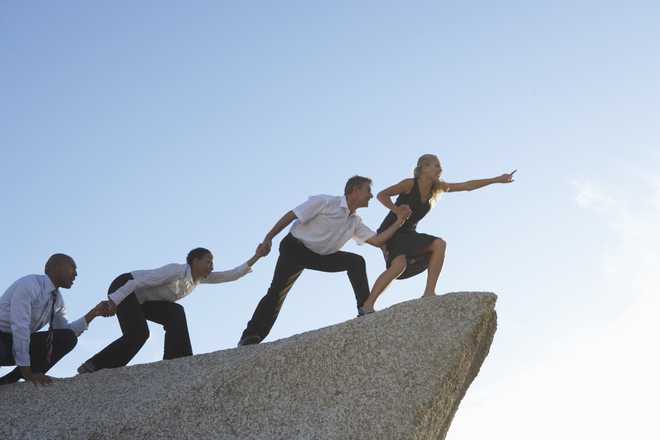 Every Women's Day, we eulogize women and extol them to the skies. These are the women who have beaten all odds and pushed the envelope a bit further. This year, let's take a step further, and see what lies beyond and behind the cozy C-suites and the corner offices. What are these women, whom we envy, go through. What is the precarious balance they strive to achieve day in and day out? For many of the women who have broken the glass ceiling, it is the glass cliff that threatens their success story. Glass Cliff - a term coined by Dr. Michelle Ryan and Professor Alex Haslam from the School of Psychology at the University of Exeter around 10 years ago - is a bitter reality that working women at almost all levels of hierarchy have faced at one point or the other in their careers, though its effects are more dangerous for those higher up in corporate hierarchies. As described in Ryan and Haslam's research, the glass cliff examines what happens when women take on leadership roles. Repeated studies have shown that women tend to be appointed in leadership positions under very different circumstances than men. More specifically, this research suggests that women are more likely to be appointed to leadership positions that are associated with an increased risk of criticism and failure. Women's leadership positions can, thus, be seen as more precarious than those of men. Women enter the C-suites normally to save organisations from the quicksand and when the company isn't recovering from a crisis, it's often they who get axed.

Talking about whether women are given leadership positions during crisis time Shaila Dutt, CEO, Executive Search, a company that deals with hiring women at the top rungs of the ladder, says that taking just the negative connotation of the term would project women in a negative way. Instead it should be seen as an opportunity to prove themselves. "Companies and Boards are extremely prudent whilst choosing a leader to steer the ship in tough times. Their objective is to find the "right" candidate and they will usually look at hiring with a gender neutral lens. This is true especially in the Asian context. Women in leadership roles have always been chosen on meritocracy & competence and have more than often proved sceptics wrong by outperforming any and all expectations. Case in point being Vinita Bali, who was bought in to revive Brittania's flagging fortunes and what she was able to achieve is a case study in many management schools. Or more recently when Shivani Hegde was bought in by Nestle to revive the brand after the Maggie debacle".

Taking over the reins during "difficult or precarious" times is a wonderful opportunity for women leader to showcase their capabilities. Often while considering a woman to lead in terms of a crisis is the Board's way of signaling change and transformation in the company. Women bring a different perspective to boards and traditionally have shown the capability to lead with a higher degree of EQ. "Though these opportunities, especially in India, are few, women leaders must rise to the challenge and approach the so called glass cliff with a strong plan, the will to execute and a degree of positivity and optimism, as any leader would, gender irrespective", says Shaila.

Factors that lead to the 'glass cliff'

Women traditionally are viewed as innate caretakers rather than innate leaders, so companies feel more compelled to give women a chance when they are running out of options, when they're struggling to experience needed growth or experiencing either an external or internal crisis. Women are then brought in to come clean up the so-called 'mess.' So the prevalence of gender stereotypes support the circumstances in which a male or female leader is preferred. Also, hiring a woman leader is a signal of change. The board may decide that their current approach, with a man at the helm, isn't bringing them the results they want, so they change course and bring in a woman. Some might argue that, this shows the potential strength of a woman's leadership, but, it seems clear there are no noble intentions at the heart of this. On the contrary, the chances of failure are much higher and the woman CEO can oftentimes becomes the scapegoat.

Another reason this happens is what researchers call "in-group favoritism." Most decision makers in companies are men, so when a precarious or a risky position opens up that might have your head on the chopping block, men might want to protect their fellow in-group members that is other male colleagues. So they bring in someone from the 'out-group' - a woman. Now it might appear as though equal and fair opportunities are being offered up here, but that's not the case.

How to prevent yourself from slipping off

Through my discussions with many successful women, whether they're in the corporate world, in media or in politics, the resounding word I hear is "support." When you're being offered a senior position, don't just look at the financial gains and financial resources you will acquire, but equally important are the social resources. Salary and compensation shouldn't be the only part of your negotiations; find out what support structures and mechanisms organizations have in place to help you do your job in the most effective way possible so you'll all come out ahead. "Money and power are insignificant if you're only going to hold on that position for a year or so. Longevity is key. It's important to sit down with the people who have hired you and involve them in your successes and losses. I say lean on. You need a solid support structure and a team you can lean on", says Shaila.

Message for women at the C suite level

It’s generally harder for women to secure leadership positions, so when a lucrative opportunity comes knocking many women throw themselves at it. In the early days of my career, I would mainly focus on the position itself, the job description and the salary, but after being in the news industry for a number of years, other factors matter just as much. And all these notions of the glass ceiling, the glass cliff, they further define my decisions.

So one of the things I now look for is workplace diversity — not just the number of women working at a news network but the number of women who are in senior positions. I think that’s a great indication for one’s career trajectory, because you don’t have to shatter the glass ceiling, it’s already been done for you.

Also look for mentors and colleagues who inspire healthy competition and offer support. It’s that ‘S’ word again but success at any level is never achieved alone. It’s always done with the support of others. Ultimately, career-driven women love a challenge, so  the glass cliff should not be feared or avoided, but rather approached with an equal dose of caution and optimism and a strong plan in hand. — Shaila Dutt