April 21, 2017: The Jalandhar police arrested three persons, including two Nigerians, and recovered 18 mobile phones with international SIM cards and a laptop from them. 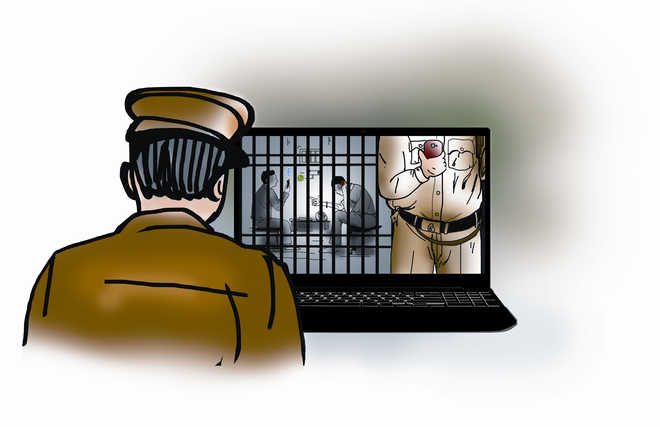 April 21, 2017: The Jalandhar police arrested three persons, including two Nigerians, and recovered 18 mobile phones with international SIM cards and a laptop from them. The group was part of an international drug cartel having bases in African countries. Most SIM cards recovered from foreign national students involved in drug peddling belong to foreign telecom operators.

May 30: The state police busted an alleged terror module involving nine persons, including a woman, allegedly a drug smuggler, a retired district education officer’s son and a 17-year-old boy, allegedly radicalized through the internet. They planned to kill senior leaders, including Jagdish Tytler and Sajjan Kumar, both accused in the 1984 anti-Sikh riots cases.

July 1: In A first-of-its-kind case in the state, Ashu Jain, a Banur-based trader, was kidnapped by half-a-dozen men on May 30. The kidnappers demanded 20 bitcoins from Jain’s family for his release. At the time the kidnappers made this demand, the rate of one bitcoin was Rs 2.05 lakh.

Nov 7: A terror module was busted. It was allegedly backed by Pakistan’s espionage agency ISI. The members were involved in the killings of RSS leader Brig Jagdish Gagneja and seven others. Investigations revealed that four conspirators had been trained at various places abroad and had been using encrypted mobile software and apps for communication with handlers based in Pakistan and a few western countries. An encrypted message to kill “a man in white clothes with a cross around his neck” was meant to eliminate Pastor Sultan Masih in Salem Tibri of Ludhiana.

Punjab is known to be of crucial concern for national security: It has a hostile neighbour, ‘techno-savvy’ radical groups settled abroad, and is a hot-spot for drug cartels for its close proximity with the ‘Golden Crescent’ route comprising Iran, Afghanistan and Pakistan. Plus, it also has a web of human trafficking networks.

The state remains a hot battle zone for cyber watchdogs from law enforcement agencies and their shady counterparts peeking every now and then from the ‘dark web.’

Twenty-one year-old ‘A’ was an ordinary youth from a border village of Gurdaspur district. With no regular income to support the family, he was finding it difficult to take care of his ailing parents. He was lured into the gold smuggling by one of his neighbours about a year back. Since gold was cheaper in Pakistan and silver in India, the smugglers interchange both the metals across the fence to earn profits. Later, his handler in Pakistan asked him to smuggle heroin into India. Finally he got into the deadly business arms smuggling.

By communicating with his Pakistan handlers on end-to-end encryption chat applications and Voice over Internet protocol (VOIP), he managed to take the deadly business up to Delhi and Mumbai. Later arrested by the state police, he narrated his story. The main worry for the cops is: His is not the only episode.

Encryption is not a new technology and forms the backbone of secure communication and data transmission over the Internet. Its use was limited to financial transactions and secure data transmissions. The ‘effort’ was enough to alert security agencies to review their cyber security capabilities which were initially found to be almost negligible.

Cyber crime in India has increased three-fold in the last five years with Maharashtra and Uttar Pradesh leading the chart. But the figures are not a true depiction of the ground reality. Ritesh Bhatia, a Mumbai-based leading cyber security expert, says most cases go unreported and those reported do not get transferred into an FIR due to the belief that the police cannot track them.

Also, except child pornography cases, most offences under the cyber laws are bailable. “What most state police departments are doing is training an old dog with a new trick which will not serve much purpose. In a border state like Punjab, there is an urgent need to form a separate wing of cyber police that can monitor and intercept any cyber attack even before its gets executed by its handlers,” says Bhatia.

While some cops with technical background have managed to access dark web, they cannot use it to chase crime syndicates as they are yet to get expertise to decipher the dark sites. A dark web is a part of the World Wide Web (www) that is only accessible by means of special software, allowing users and website operators to remain anonymous or untraceable to deal with drugs and other crime syndicates. The entire transaction in dark web is being done in crypto currency like bitcoins and Monero and the sellers and buyers on the net give credit ratings to every buyer to enable him to deal further. Also, most syndicates trading on the dark web prefer to deal with people from their own community or who understand their language.

Data monitoring is a tough challenge for the security watchdogs. The borderless nature of information flow over the Internet complicates online privacy, as an individual’s data is subjected to different levels of protection depending on which jurisdiction it is residing in.

A senior state police officer gives an instance: while international agencies joined hands to shut down the deadly ‘Blue Whale’ game from the global World Wide Web in no time; they are reluctant to join hands to address cyber attacks. “Laws differ from country to country, so security agencies are hesitant to address it at the global level,” he said.

Dr Kamlesh Bajaj, CEO of the Data Security Council of India (DSCI) and former deputy director general, National Informatics Centre (NIC) says that fast evolving technology, without any layer of security laws, is posing a major challenge. “While social networking apps like Whatsapp only allow sending message and its decipher code to a particular mobile number without storing it to their server, other apps like Snapchats even erase the message from the receiver’s devise after one has read it. With no footstep to follow, how can you expect the state enforcement agencies to track and decipher them?” asks Bajaj. He has set up cyber forensic labs to provide training to policemen.

He says since servers of social media websites are located outside the country, the government cannot easily retrieve information from them.

India currently has 60% voice data users. The country is fast moving towards the higher average of data communication users. Cyber crimes in India are being governed by The Indian Penal Code and the Information Technology Act, 2000. “There is a dire need to bring data cyber crime, too, under stringent laws,” says a cyber security expert.

Mohali to get top research facility

The Union government is setting up a cyber research facility at Mohali in collaboration with the state police. DGP Suresh Arora says the state police is setting up a cyber investigation technical support unit at 41 places at all district ranges and zonal levels. “People must be made aware about cyber frauds. The state police is in the process of updating itself with the ever-evolving technology to counter cyber threats,” said Arora. Punjab has a state-of-the-art cyber and mobile forensic lab at Phillaur.