Story of a stolen generation

Based on a real-life incident, Australian filmmaker Phillip Noyce’s Rabbit Proof Fence is a tale of human tenacity 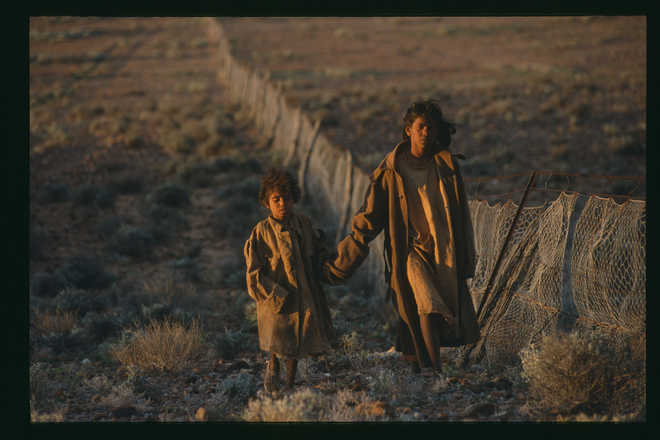 Face of courage: Some 2,000 girls gave auditions and 800 were interviewed before the three girls were selcted for the film

Molly, Daisy and Gracie are on a long track back home. The three girls, who are of Aborigine origin, are escaping from a ‘Native Settlement’ camp where they had been confined. They had been plucked from their families and community, which live near Jigalong on the edge of the Gibson Desert in western Australia.

Based on a true story, Australian filmmaker Phillip Noyce’s award-winning film Rabbit-Proof Fence is set in the 1930s. To escape, the girls follow the rabbit proof fence track, which covers more than 2,000 km. Through their native instinct, they know that if they follow the progress of the fence, they would eventually reach their families. The authorities had put up the fence that bisected the land from the north to the south to prevent rabbits from destroying the crops. The landscape is vast, unforgiving and hard, but the girls — the rebellious 14-year-old Molly, her sister Daisy and cousin Gracie — trudge on as they hide, forage, take shelter in a home of a sympathetic soul, mislead the cruel Moodoo, a cruel tracker, himself an Aborigine, with their own instinct. In between Gracie loses hope and falls into the hands of the police. Molly and Daisy eventually reach the welcoming arms of their mother. This is an astonishing story of human tenacity. At the end of the film, the real figures on whose lives the story is written are shown.

Rabbit-Proof Fence mirrors a shameful chapter in the continent’s history, which is well-recognised today. It depicts the time when policymakers of Australian administration believed that half-caste children (of White fathers and Aborigine mothers) should be segregated from their families in the outback, and ‘educate’ and ‘civilise’ them to serve as domestic  help in White homes, hoping that, eventually the generation would ‘breed out’. These three girls were among the thousands of children, who were forcibly taken away from their homes, one of the ‘Stolen Generations’ as referred today. In 2008, then Australian prime minister Kevin Rudd had apologised for causing “pain, suffering and hurt” to these Stolen Generations.

According to Noyce, who was in Kolkata to attend the 24th Kolkata International Film Festival, “This is a marvelous adventure story and thriller, which celebrated courage and resilience of human spirit.”

“The idea of making a film that celebrates Aboriginal family history as an important component of mainstream Australian history was an irresistible challenge. When I grew up, we knew nothing about Aborigines, we didn’t talk about them. Aborigines weren’t counted in the census until 1967,” he writes in the book Backroads  to Hollywood: Phillip Noyce.

Casting was a major problem for the film. A three-month search across Australia among Aborigine communities, helped by their leaders and school teachers, found 2,000 girls auditioning; interviewing 800 of them Noyce selected the three girls.

Noyce believes that a musical score holds a film together giving it a language that merges with the story. He even convinced legendary composer Peter Gabriel (of The Last Temptation of Christ fame) to join in. “We sent him sound recordings of Australian bird-calls, beats of indigenous instruments, even conversations, and sitting in London Gabriel composed the marvellous background score that enlivens the girls’ journey authentically.”

Cinematographer Chris Doyle adopted a ‘washed-out look’, not a pretty picture-postcard look because for the girls it’s a world “harsh and cruel and tormenting” in his own words. Though there was some controversy in the country due to the sensitive subject, the film went on to win awards in major international film festivals.