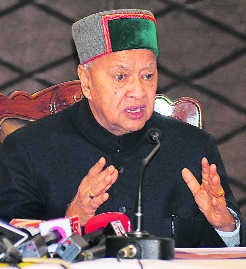 Chief Minister Virbhadra Singh today laid the foundation stone of the Kangehan-Thambu lift drinking water supply scheme to be constructed at a cost of Rs37.55 crore at Sulah in Kangra district.

This drinking water supply scheme will benefit over 80,000 people of Sulah and Jaisinghpur constituencies. He also laid the stones of the building of the police post and the residential complex at Thural to be constructed at Rs 2.63 crore and a bridge over the Neugal Khad on the Thural-Chalah road to be constructed at a cost of Rs 94.5 crore.

The CM also inspected the additional block being constructed in the complex of the Community Health Centre, Thural, and also enquired about the well being of patients. He directed PWD officers to complete the work within time and ensure quality work in the ongoing construction.

The Chief Minister said the state government had opened schools and colleges in rural and remote areas to provide educational facilities to the students, especially girls near their homes. The CM said the government had accorded priority to education and health and there was no paucity of funds.