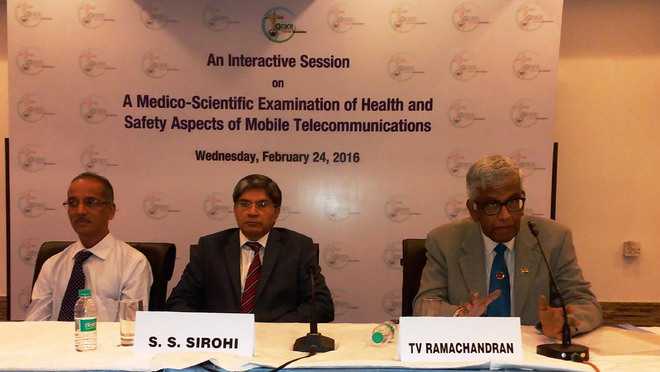 Telecom expert TV Ramachandran (right) along with other dignitaries speaks on the safety aspects of telecommunication towers in Dehradun on Wednesday. Tribune photo

Leading doctors and telecom expertsdiscussed scientific facts pertaining to electromagnetic radio frequency (EMF) here yesterday. They said there was no relation between mobile phone tower radiation and cancer or other health hazard. They categorically denied that there was any link between EMF emissions and human health.

Dr Eshwar Chandra said, “So far there is no scientific data to indicate the existence of cancer risk from telecom tower emissions. Studies done by the World Health Organisation (WHO), the US Food and Drug Administration (USFDA) and other reputed organisations have found no scientific evidence to establish a link between ailments like cancer and infertility and radio frequency (RF) radiation.”

Dr Chandra, one of the doctors who works for the Grace Cancer Foundation, an organisation that provides education on early detection of the disease, treatment support and help for the needy, has been leading the fight against cancer and has been researching the issue of mobile phone tower radiation and human health.

The speakers at the event emphasised that radiation emanating from mobile towers are non-ionizing in nature like radio waves and not harmful to human health in any way.

Sirohi said, “India follows one of the strictest norms in permissible levels of EMF emissions, which are ten times more stringent than the international standards prescribed by the WHO-recommended International Commission on Non-Ionizing Radiation Protection (ICNIRP), and followed by 90 per cent of the countries in the world. Moreover, the Department of Telecommunication (DoT) has a country-wide network of over 30 specialist enforcement and monitoring units called TERM cells to make rigid checks and enforce severe penalty in cases of non-compliance.”

Telecom expert Ramachandran said, “ Mobile phone tower radiation is lakhs of times weaker than X-rays or UV rays, even visible light. There is absolutely no need to have any concern whatsoever as regards the radio-frequency radiation from mobile phone towers.”