In our country, the higher you go up the hills, the greater are the chances of you encountering gods draped in controversies. 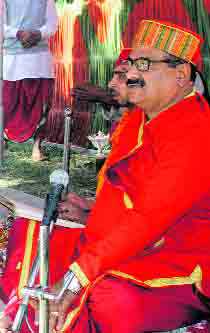 In our country, the higher you go up the hills, the greater are the chances of you encountering gods draped in controversies. In Himachal Pradesh’s dozens of temples, whose net worth is estimated in government accounts as Rs 284.26 crore, the one at Kullu has come to symbolize the power-play: on the one hand is the government insisting on its takeover and, on the other, the local MLA who until recently lay ensconced in the company of the ruling Congress, but parted ways to join the opposition BJP. That was the sin, he would say.

There is yet another interesting twist: Chief Minister Virbhadra Singh and local BJP MLA Maheshwar Singh are both royal scions, mired in controversy over the Kullu temple takeover. Though the weeklong famous Kullu Dusehra is due to start from Oct 11, the controversy threatens to take the shine off the event.

The Congress government in the state has so far taken over 36 temples, claiming that it has ensured the safety and security of the holy places and the pilgrims. The government’s decision to finalize an MoU with the Mines and Mineral Trading Corporation (MMTC) for converting a certain percentage of gold (130 kg in all) and silver (2,700 kg) into coins is hanging fire for over two years.

Mahehwar Singh, on the other hand, went to court this July after the Deputy Commissioner served him a notice informing him of the government’s intention to take over the temple. Maheshwar has told the court that he is the main Chharibdar (custodian) of Lord Raghunath, and hence cannot be ousted.

The temple controversy has political overtones. Maheshwar won the 2012 Assembly election on the Himachal Lokhit Party (HLP) ticket. He later returned to the BJP fold. It was owing to his differences with former CM PK Dhumal that he along with other BJP dissidents had floated the HLP and ensured the party’s defeat. For almost four years Maheshwar supported Virbhadra-led Congress regime. Though the temple takeover had been in the pipeline for the sometime, the sensational theft on December 9, 2014, put a question mark on the safety and management of the temple, run by Maheshwar and his family. The stolen antique idols included those of Lord Raghunath, Goddess Sita, Lord Hanuman, Narsingh and Ganesha.

The move also saw Maheshwar’s younger brother Karan Singh, Ayurveda Minister in Virbhadra cabinet, claiming his property right in the temple. Maheshwar Singh said the takeover decision would not affect the Dasehra celebrations. Apprehending obstruction from the government in allowing him to perform the rituals, he knocked at the doors of the Raj Bhawan, seeking the intervention of Governor Acharya Devvrat.

He said it was strange that the CM was taking personal interest in the takeover. Chief Minister Virbhadra Singh has defended his decision. “The takeover is meant to facilitate better management of shrines. The ongoing court case will not affect the religious ceremonies in Kullu,” he said. Deputy Commissioner Kullu Yunus Khan says arrangements were in place for the Dusehra festival.