The colossal structures of Vadodara : The Tribune India

The colossal structures of Vadodara

Set on the banks of River Vishwamitri, Vadodara with its bylanes shaded in abundance of Banyan trees, in fact, derives its name from Sanskrit word ‘vadotar’ or the ‘belly of banyan tree’. 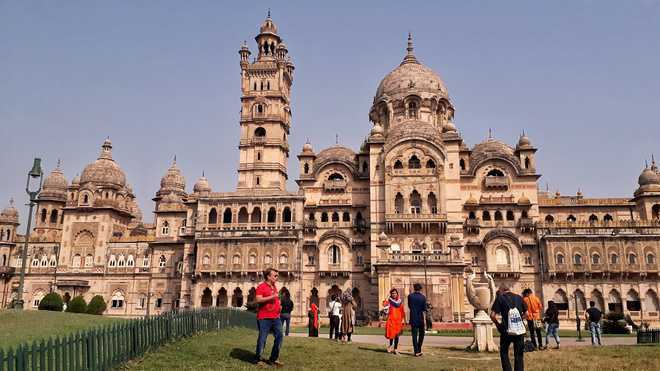 Set on the banks of River Vishwamitri, Vadodara with its bylanes shaded in abundance of Banyan trees, in fact, derives its name from Sanskrit word ‘vadotar’ or the ‘belly of banyan tree’. Having changed hands many a times from Guptas, Solankis, Delhi Sultans and Mughals, the State of Baroda finally became seat of power of Maratha Gaekwad kings. It was during the reign of Sayaji Rao Gaekwad III in 1875 that saw the city transform into an educational and industrial centre. The Maharaja patronised art and architecture contributing museums, libraries, Maharaja Sayaji Rao University, gardens, court and palace to the city.

The city which has claimed place in the Guinness records for the largest congregation of Garba dancers during the festive season of Navratri, proudly boasts of its ample heritage. The wadas and public markets like Khanderao market give a glimpse of town planning and unique architecture. While 144 feet high imposing dome over university building is the second largest masonry dome in India, it is Laxmi Vilas Palace, which exudes loftiness and grandeur like no other structure.

The palace of Maratha kings built in 1890 in Indo-Sarcenic Revival architectural style is known to be the largest private residence and claims to be four times the size of Buckingham Palace with 150 rooms. Equipped with elevators and modern amenities, the palace which sits wrapped in green spread of 18 hole golf course, is an amalgamation of various architectural styles with chajjas and chhatris of Rajasthan to Venetian and Gothic arches, Turkish domes and interiors like that of European houses.

The portions of the palace that are open to public and not occupied by descendant family, display Ravi Varma paintings, armory, European art, porcelain, sculptures, ornate darbar hall, coronation room, courtyards with fountains and a small cafe. Roaming through the palace, the audio-guide informs me of history of Gaekwads and I am left gaping at the exorbitant affluence. The palace is not the only structure that is larger than life in Baroda. The Sardar Sarovar dam, a gravity dam, on River Narmada is also one of the largest dams of its kind in the world.

There was a distinct electric hum as one climbs the steps of one of the viewing decks near the dam. Second to Grand Coulee Dam of the United States, the dam’s fiercely gushing waters make a fearful noise only to be tamed as it flows in the canal at the base of its 163 metre height.

But nothing prepares you for the towering colossal Statue of Unity. It has to be seen to believe what the word ‘tallest’ implies as the eyes travel up into the blue sky. The enormity of the statue leaves you feeling intimidated, dwarfed and insignificant; truly reflecting the stature of the man, Sardar Patel, the Iron Man of India.

Located at the island of Sadhu Bet downstream of Sardar Sarovar Dam, this tallest statue in the world is an engineering excellence. The 157 m tall statue stands on 25 m podium which houses a museum and audio visual gallery relating to various contributions of Sardar Patel and his life history.

Elevators, which form the core of statue’s legs, deposit almost 200 viewers in the viewing gallery that at a height of 153 m reaches the chest of the statue. Peeping through the grills of viewing gallery, one could see the river to the farthest side. The excitement of visiting school kids to see the rest of the world seem smaller from such height was palpable in the noise levels at the viewing gallery.

Sculpted by none other than the 93-year-old Padma Bhushan Awardee, Ram Vani Sutar, the statue is clad with 6,500 bronze sheets and can withstand winds of speed as high as 180 km/hr and earthquakes measuring 6.5 on the Richter scale.