The spirit of Kartarpur

An entreaty to the Almighty to enable the followers of Guru Nanak to have the freedom to worship at the gurdwaras that have been taken away from the panth is an integral part of ardaas, the Sikh daily prayer. 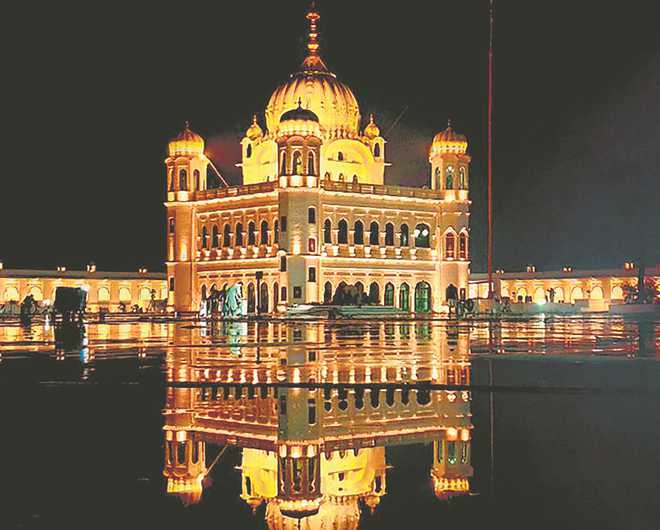 Guiding light: Kartarpur, literally the abode of God, was a settlement of those who committed themselves and their families to Guru Nanak and his teachings. Photo: PTI

An entreaty to the Almighty to enable the followers of Guru Nanak to have the freedom to worship at the gurdwaras that have been taken away from the panth is an integral part of ardaas, the Sikh daily prayer. The need for this ardaas arose because Partition tore apart Punjab and its people. It also rendered much of the Sikh sacred spaces inaccessible to a vast majority of Sikhs.

Nankana Sahib is where Guru Nanak was born, and Kartarpur — the town he founded, lived in for over two decades and where he breathed his last, after finding and naming his successor on merit — are among the most important historical gurdwaras associated with the founder of the Sikh faith. Naturally, there are many other gurdwaras connected with Guru Nanak and his successors that have been inaccessible to the Sikhs on the whole since 1947. The longing to pray there led to the fore-mentioned addition to the ardaas.

The excitement and jubilation that has been seen among the Sikhs at a chance to visit their sacred space is palpable, more so since it has been timed to coincide with the 550th birth anniversary of Guru Nanak.

It would be instructive to take an imaginative trip to when Kartarpur, literally the abode of God, was founded. There was a settlement of those who committed themselves and their families to the Guru and his teachings. The Guru's mother, Mata Tripta, his wife Bibi Sulakhni, and sons Sri Chand and Lakhmi Das lived among them. They led lives typical of Punjabi farmers, the day shaped by the needs that come with tilling the land and attending to other worldly chores.

The Guru, his family and his followers lived life as it ought to be lived. What kind of followers were these? Guru Arjan Dev, the fifth Guru, says "sants" — people who are and live by the Truth. Naturally, Kartarpur attracted many people. However, only the committed individuals stayed and engaged in honest labour, even as they devoted themselves to the Creator. Guru Nanak's bani was recited as they sought to align the material and spiritual aspects of right living.

The Guru met all who came to meet him, the curious, the seekers and the followers. The Guru's bani was written, recited and sung. Guru Nanak was spending time with his family, which had been separated from him during the long udasis that took him to what is now Sri Lanka in the south, to Tibet in the north, Bangladesh in the east and Saudi Arabia in the west.

Piety prevailed. Recognising the truth of the oneness of God and his creation, living a truthful life, devoted to spiritual pursuits and sustainable living….this was utopia, except that it was tangible. We find the beginnings of sangat, pangat and langar, practices that were later institutionalised, here.

The collective spirit of the sangat of Kartarpur spread from the town founded by Guru Nanak to reach out to the world. The spirit transcended the physical. Guru Nanak's successors founded new towns. They all sought to approximate the environment that existed at Kartapur first.

The gurdwara at Kartarpur occupies a special place in Sikh ethos. It was well-tended to until Partition. Just before Partition, the Sikh leaders forcefully presented their case for free access to important Sikh gurdwaras that would fall into Pakistan. The late Justice Teja Singh, in his submission to Boundary Commission, said: "for the Sikhs, the city of Amritsar, the city of Nankana Sahib in Sheikhupura district, the city of Kartarpur in Shahargarh tehsil, Gurdaspur district, are the Mecca and Medina and their Hardwar and Benares." The pleas, even a massive protest at Nanakana Sahib that cost several lives, were of no avail. After Partition, the gurdwaras and the properties attached to them were considered "evacuee property."

Evolving geopolitical equations and potential religious tourism changed the scenario somewhat over the years, but the physical spaces will remain mired in Indo-Pak relations.

The recent months have been of hope for the Sikhs. The physical structure of Darbar Sahib, Kartarpur, has been transformed, Sultanpur Lodhi has been spruced up, and a new road laid to accommodate the expectedly large flow of pilgrims. Various protocols have been chalked out, differences brushed under the carpet and arrangements made for pilgrims. As for the ordinary Sikhs, they are just waiting for the day they can pay obeisance at this historic gurdwara.

Guru Nanak’s Kartarpur was the venue of realisation and implementation of the principle of Oneness of the Creator and the created. It was the place of dignity where artificial inequalities, brought about by caste and gender discrimination, were eliminated, priestly classes and others with pretentions of worldly status were negated by the declaration and acceptance of divinity in everyone — Guru Nanak's followers were expected to extend themselves, spiritually, socially, and physically.

The 550th anniversary of his birth ought to be an occasion for all his followers to present a united front in consonance with this vision, to be exemplars of his teachings, and to produce literature that would allow others to learn about the founder of Sikhism.

The Guru's vision was of oneness. Those who seek to speak in his name are far from unified. Finding a shadow of a vision in the programmes that have been rolled out would be quite a task. The squabble for credit is as ill-founded as it is distasteful.

We tend to blame leaders. Writing as a Sikh, it is time to introspect. Do we stay true to the core of the Guru’s teachings in our everyday life? Are we not reducing ourselves by performing rituals without reflecting on and following the instructions of the Guru?

Punjab has the largest concentration of Sikhs in the world. It is a state where the environment is exploited; stubble burning poisons the atmosphere and increasingly inadequate education, lack of moral compass and substance abuse contaminates the future generations.

We know the Guru and his teachings in a superficial manner. Now is the time to be the real followers of the Guru, to identify with the poor and eschew consumerism that has gripped us.

The world admires the spirit of Sikhs who are getting ready to perform Sewa and go to Gurdwara Darbar Sahib, Kartarpur. Just as there is a narrow corridor that links us to the place where the Guru taught us how to live, there is also a narrow corridor that allows us to transcend the distance we have, unfortunately, moved away from the essence of the Guru’s teachings.

Real obeisance to the Guru would be to devote ourselves to his teachings. To stand out because of the strength of character. To conquer the ego and bow before the Almighty rather than temporary temporal masters. Let the 550th birth anniversary of the Guru be the occasion that starts the process of true metamorphosis of his followers.