Tragedy along the ‘river of sorrow’

It’s that time of the year again: Rani Kaur’s family in village Lacchru is shifting to the first floor of their home. 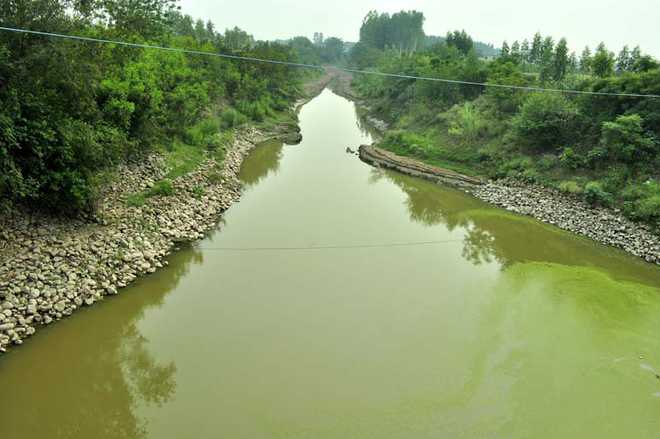 Embankments along the Ghaggar are being strengthened.

It’s that time of the year again: Rani Kaur’s family in village Lacchru is shifting to the first floor of their home. The kitchen moves to the first floor as the swollen Ghaggar’s spillover gushes in, the kitchen is flooded and the ration is ruined. “This is the minimum we can do,” says Rani.

Hundreds of villages dread the day the Ghaggar in spate crosses the Bhakhra Main Line (BML) canal through siphons at Khanauri in Punjab and the Bhakhra Main Branch (BMB) near Jakhal in Haryana. The river was considered a boon for the farmers of the area but has slowly become a death trap. Successive governments have failed to act. AK Gupta, engineer-in-chief in the Haryana Irrigation Department, says the Central Water Commission (CWC) has suggested a project that involves 25 barrages at various points in the two states where floodwater could be stored. “However, it involves funds as land needs to be acquired,” Gupta says. Lack of coordination between Punjab and Haryana, who are often seen pointing an accusing finger at each other on water issues, is harming the interests of the people in both the states.

The situation has come to such a pass that villagers on the Punjab side keep the basement of their house vacant to minimize the flood damage. Some have raised their houses almost 10 feet above the ground. Shops too are especially designed to keep off the floodwater. And the villages near the banks complain of a pungent smell and saline water is unfit for irrigation.

On its side, Haryana has tried to build a concrete wall to save its villages from a river that has brought people living along its 350-km length in the two states to their knees. “The Ghaggar basin gets frequently flooded because of a slope and the lack of horizontal drainage,” says Kurukshetra University’s Dr Jaglan.

The mismanagement has caused a social disruption too. Villagers in the Ghaggar catchment areas say they find problem in getting a match for their boys. “My brother got married when he was 38 years old. Offers of his marriage were declined for years because we live in a flood-affected area. We have 17-acre fertile land, but the girl’s side was simply not interested as they argued about the safety and security of their girls. Finally we married him off in Chhattisgarh”, says Baljeet Singh, from village Harchandpura, Patiala.

Patiala Deputy Commissioner C Ramvir Singh said: “Villages where grooms do not get brides are usually the ones that are almost next to the Ghaggar.”

An irrigation department expert said with time the sheet spread of the river has badly shrunk due to illegal encroachments and digging. The land prices are very low. Even during the property boom in Punjab when average agriculture land in far-off villages fetched Rs 60-70 lakh per acre, these villages had their land available for a mere Rs10 lakhs.

The Ghaggar emerges from Sirmour hills in Himachal and receives sewage and industrial waste from various towns in Haryana before entering Punjab where it further gets more waste inflow. The river runs its 165km course as it enters the state at village Mubarikpur and leaves it at village Bhunder. The water quality at the river entry point monitored by Punjab Pollution Control Board during January, 2014 is Class D (almost worst). This is because of domestic and industrial discharge in Himachal and Haryana.

In Hashimpur Mangta village near Patiala, the Ghaggar flows just 80 metres away from the nearest houses and villagers allege that that throughout the year contaminated water continues to pollute the Ghaggar. “You can see how contaminants have spoiled the river,” says a villager.

The PPCB officials say they have made arrangements to keep the river water pollution-free, a claim dismissed by villagers. “These officials should come here in the winters to see for themselves how difficult it is to breathe near the river,” says Bhupinder Chatha, a villager in Dharmherhi.