Srinagar: A trip to Kashmir was once considered incomplete without a stay in a houseboat that used to lodge celebrities like Beatles lead guitarist George Harrison and Bollywood legend Dilip Kumar. 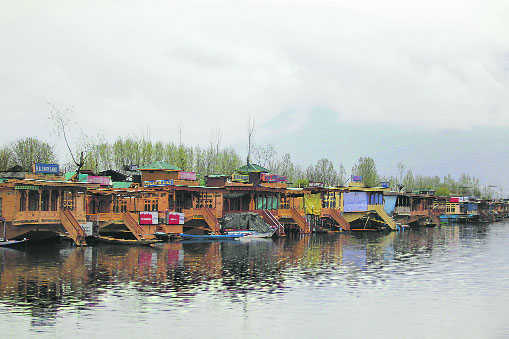 A trip to Kashmir was once considered incomplete without a stay in a houseboat that used to lodge celebrities like Beatles lead guitarist George Harrison and Bollywood legend Dilip Kumar. Guests like Nelson Rockefeller, the 41st US Vice-President, and ambassadors of foreign countries too would prefer to stay at the houseboats during a visit to the Valley.

However, now its owners fear that the houseboats may soon become extinct. The number of houseboats on the Dal and Nigeen Lakes is reducing with every passing year and its owners say repairing or renovating the existing ones too was difficult.

“We are made to run from pillar to post to get permissions for doing repair or renovation works. Though 1,550 houseboats are registered, you will come across only 550 in the Dal Lake,” said Ejaz Kotru, a houseboat owner at the Dal Lake.

Getting permissions is difficult mainly due to ecological concerns as the Dal Lake, which is a prime tourist spot, is facing pollution issues. As per the houseboat owners’ association, the number of houseboats has dipped from 2,000 to less than 750 on the Dal and Nigeen lakes.

Houseboat owners say they need to keep the houseboats in fine condition to live up to the expectations of tourists. Though the Dal Lake still houses several luxury houseboats, former chairman of the Houseboat Owners Association (HBOA) Mohammad Yousuf Chapri said some houseboats were so old that there was a chance that these floating boats might crumble if moved from one spot to another.

He was referring to the High Court order regarding the relocation of houseboats to the Dole Demb area of the Dal Lake. The order had been passed by the court in a bid to prevent pollution in the Dal Lake and to supervise state government’s efforts to conserve the lake. For Dal Lake’s beautification and proper sewage disposal, the government in the first instance is planning to create five clusters of 76 houseboats at the Dole Demb area inside the lake. Presently, houseboats as per the government are placed in a haphazard manner and realignment would also help in setting up a common sewage treatment plan.

Even as the houseboats continue to attract high-end tourists, well-known houseboat owner Mohammad Azim Tuman, who has remained associated with the tourism sector for decades, said guests too had started complaining about the bad condition of the houseboats.

“Recently, renowned Bollywood director Shyam Benegal stayed at my houseboat. He too noticed that houseboats have lost their sheen. He said he could not imagine Kashmir without houseboats and there is need to preserve these floating marvels,” Tuman said.

He regretted that the state government was doing ‘little’ to preserve houseboats at a time when it was talking of promoting heritage tourism.