What will happen to my books? : The Tribune India

What will happen to my books? 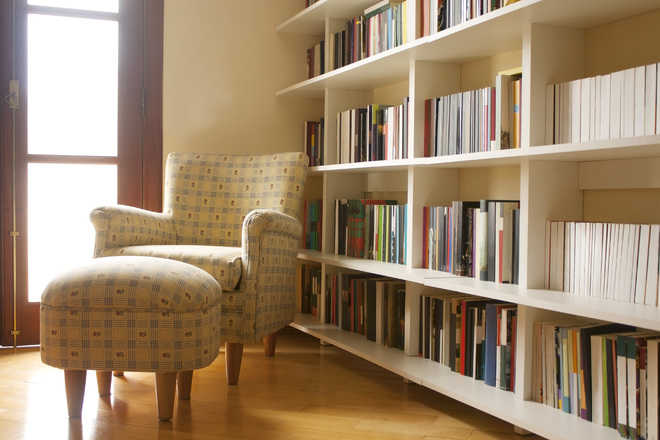 We revisit our lives through these pages. A well-thumbed tome reflects our passion for what it offers/means to us — that lovely passage, that turn of the phrase, an inflexion point that changed the narrative...much to read and reminisce about in our minds. Each journey into those pages is a unique melange of circumstances of that particular moment. A revisit may yield more, or take us on a different path. Our library reflects our choices. As visitors, we often tend to check out a person’s bookshelf.

Given this backdrop, it is easy to understand the storm unleashed by the tidying guru Marie Kondo’s statement, since clarified, that you keep only 30 books that ‘spark joy’. Kondo explained that the reference to the number of books was what she had kept behind after her cleaning efforts and that there was no fixed number of books that should be kept.

Kondo, whose 2014 title, The Life-Changing Magic of Tidying Up, has spawned a movement that is devoted to her method of tidying up, KonMari, where you essentially make a pile of your belongings and keep the things that ‘spark joy’. Being an organisational guru, she categorises stuff and you make your pile accordingly.

The streaming service Netflix has her show, Tidying up with Marie Kondo, which has been an instant hit. In the show, she visits an American family and helps it tidy up the house. It is in one of the episodes that she tapped unused books and made the statement that got her into trouble. A Twitter storm started, followed by a massive debate, with mainstream media joining in with opinion pieces, largely by outraged bibliophiles, as well as Kondo defenders. Some of her followers saw subtle racism at play in the criticism.  As always happens, the subtleties of the message were lost in the noise.

We collect, much more than we need. A truism, if ever there was one. Indeed, civilisation and amassing of things are intertwined. De-cluttering is a necessity, often imposed by shrinking space or change of circumstances, residences, etc. In other words, it is something that we are compelled to do. Any effort to impel us to tidy up our lives has enormous charm, till you get down to it.

Most houses have tidy public areas, and not-so-tidy (read messy) personal spaces, where individuals can be what they want to be. Does it come as a surprise that most of us are slothful, to varying degrees? The sheer number of self-help books and shows that promote tidiness is a good indication of how deep this behaviour pattern is, as is the desire to get out of it.

Organisational experts for homes are now a ‘thing’. You can hire them, and unlike Kondo, they will do the work, but the painful decisions about what stays and what goes is still yours.

We spend many decades collecting books. We read some; others represent our hope for the time and the inclination to read them. Sometime in the future of our imagination, we will have the leisure to peruse them. Naturally, imagination can let us down when confronted with the harsh reality of our hectic lives, but then we all live on hope, don’t we? The Japanese even have a word for it, tsundoku (acquiring books but letting them pile up in one’s home without reading them).

Change of residences can trigger the move to downsize the library. No matter which method you use, KonMari or any other, it is painful. Yet, as you meet old friends, you realise that there are many acquaintances and some waiting to make an acquaintance with you.

The space squeeze forces you on the path of renunciation, and you subconsciously push out the acquaintances, even as you may still be tempted by the promise of those who you have yet to be acquainted with. You let go, make room for more, and in time whatever space you have will also be overwhelmed by more books.

What then? In this mixed media world, where the realm of the printed word had digital and audio avatars, there is little doubt that the traditional book is still the biggest draw. What do you do when the space you can devote to collecting these runs out?

You must select the ones that need to go and find a home for them. Donate these to students, other readers, small libraries that may find them useful. They have been a part of your life for so long. You must think about where they go next.

Many scholars amass massive libraries and spend the later years of their lives asking themselves the question: "What will happen to my books?" Famous scholars are sometimes approached by universities and other institutions that seek to acquire their collections after they are no more.

Others have taken a different route, that of digitising the collections, notably through the Panjab Digital Library, and then moving the physical books to a secure library. This allows for a wider availability of the volumes. The library has significant collections of Malwinderjit Singh Waraich and Dr Gurdev Singh Sidhu. These collections, after digitisation, have been displayed at the Virasat-e-Khalsa museum in Anandpur Sahib. "We are processing an important library of a famous Punjabi author which will be announced soon," says Davinder Pal Singh, PDL's co-founder.

For other mortals, a conscious effort in identifying the inheritors of their literary treasure troves has to be made. What better way than to start by letting go early, and then keeping it up, thereby ensuring that they reach the right hands. Otherwise, there are always second-hand book stalls that pick up estate sales (a polite way of saying kabariwalas) and pass on the books to those who are still willing to pay for them.

Our books are for us. Some are also for others to see in our spaces. We invest so much time and effort in collecting them, reading them and keeping them. We can only ensure their immortality by recognising our mortality. Let’s focus on what we want to keep in our lives, even as we find a way to give to others that which was valuable enough to be in our homes till now.

E-books? Indeed, they have their place, but the day is far when they replace the traditional book, the feel of the papyrus, the allure of the cover, the aroma of opening a fresh volume. Kindle books are great when you are on the move, but over time you find a clutter on your e-book reader, too! Yes, it does happen, and the psychological effect of this de-cluttering is eerily similar. Ask me. I know!

The men and their tomes

Panjab University, Chandigarh, has the privilege of housing the library of former Prime Minister, Dr Manmohan Singh. The eminent economist studied and taught at the university. He earned his bachelor’s degree in 1952 and master’s degree in 1954, after which he studied at the University of Cambridge. He then taught at Panjab University. The selected volumes comprise his personal collection, as well as books presented to him during his long innings in public life. The original proposal was for 3,500 books to be donated to the university, which will be housed in Guru Tegh Bahadur Bhawan. The former PM

is a fast and voracious reader, and like many book lovers, he, too, struggles with the increasing number of volumes that he has to peruse. And he does not forget who has borrowed his book!

The late Khushwant Singh’s study was always overflowing with books. In the last 10 years of his life, he had the habit of telling whoever came to see him to take away whichever books he or she liked! He must have given a few hundred that way, says his son Rahul Singh. Of the thousands of books that Khushwant Singh had, perhaps more than 10,000, the collection has been distributed four ways.  Most of these he had in his Sujan Singh Park flat in Delhi. His granddaughter has inherited most of these. A second lot was in the house in Kasauli, where he spent his summers. Those are still there. The late author also gave a collection to the Kasauli Club library. He had quite a few books in his Lahore home at the time of Partition. Those, Rahul believes, his father gave to Panjab University, Lahore.

Not everyone has plans for their libraries. “It’s hard enough to do something for the people you leave behind, let alone the books,” says Ruskin Bond, who plans to leave his books for his heirs, Rakesh and Bina. The famous writer reads for pleasure and has a considerable number of books. “It is for them to do what they decide, maybe they will start a lending library!”