Why Punjab has a water crisis, and what now

Though Punjab’s water crisis has been in the making for the past over three decades, no serious efforts have been made to address it. Paradoxically, all stakeholders, including political parties, have been hitherto in the denial mode about the gravity of water insecurity. 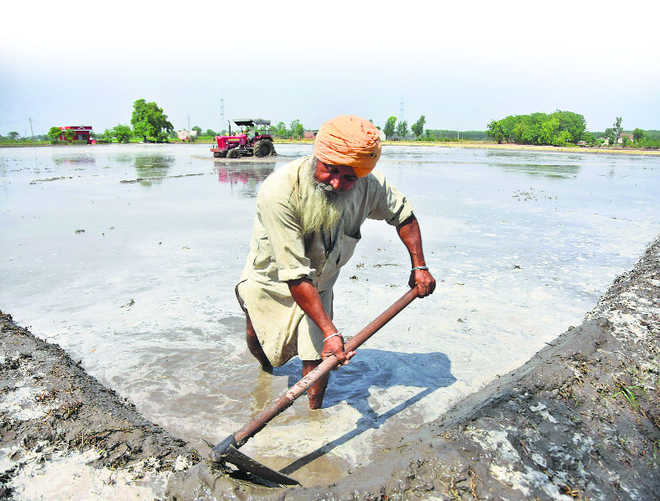 Though Punjab’s water crisis has been in the making for the past over three decades, no serious efforts have been made to address it. Paradoxically, all stakeholders, including political parties, have been hitherto in the denial mode about the gravity of water insecurity.

Fortunately, the state government now seems to be seized of the emerging water crisis, going by the convening of a brainstorming session on the problem by Chief Minister Capt Amarinder Singh in Chandigarh on June 21. The meeting was attended by various stakeholders, including farmer leaders, representatives of the industry, experts and scientists, besides Cabinet ministers and senior bureaucrats. The in-principle approval by the CM to constitute the Punjab Water Authority — though long overdue — is certainly a step forward.

Punjab was once comfortably placed in terms of water availability, but over the years, the situation deteriorated. In 1984, Punjab had 2.44 million acre ft (MAF) of groundwater, which dwindled to minus 11.63 MAF in 2013. It was mainly due to overexploitation of groundwater.

The overexploitation of groundwater led to fast depletion of the water table, due to which the average depth of tubewells increased from 49 ft during 1960-70 to 128 ft in 2013-14 in nearly 15 districts of (predominantly paddy zone). Of them, the pre-monsoon depth of the water table went down by 7 metres to 22 metres in 10 districts during 1996-2016.

The Green Revolution transformed Punjab’s diversified cropping system into wheat-paddy rotation. The country’s increasing demand for food and the vested interests of global agri-business, inter alia, were the major factors behind the Green Revolution and the promotion of paddy in Punjab. The assured supply of high-yielding varieties of seeds, fertilisers and public investment in irrigation were aimed at meeting these objectives. The public procurement under the MSP regime (since the mid-1960s) assured market clearance for the farmers’ produce of wheat and paddy.

Paddy is the main consumer of groundwater in Punjab. Water productivity of rice (quantity of water required to produce 1-kg rice) in the state in the triennium (TE) ending 2013-14 was 5,337 litres, whereas the all-India average was 3,875 litres. This is also due to applying higher number of irrigations than the recommended doses.

The water consumption for total rice production in Punjab increased from 16,642 (13,449 billion litres, 81%, for Central pool) billion litres in 1980-81 to 59,047 (73% for Central pool) billion litres in 2013-14. It is the case of virtual water export from Punjab to the rest of India. Punjab provided much-needed food security to the nation at the cost of its groundwater (the most precious non-renewable natural resource). Even the quality of its sub-soil water has got polluted in the process.

Can it be attributed to the increase in irrigation intensity? Perhaps no, as 71 per cent of the net sown area was under irrigation in 1970-71. The ever-increasing demand for water for paddy (and overdependence on groundwater to meet this demand), the higher and higher number of tubewells, sharp depletion of the water table, the increasing depth of tubewells and the rising number of submersible motors (up from 6.2 lakh in 2009 to 8.4 lakh in 2014) seem to be behind such a huge consumption of electricity in agriculture. Injudicious use of water due to the provision of free electricity in agriculture is also the reason for the depleting water table and hence the increasing consumption of electricity.

Though the state government has been trying to respond to the depleting water table, the only effective policy response came in 2009 when The Punjab Preservation of Sub-soil Water Act prohibited sowing of nursery of paddy before May 10 and transplantation before June 15. Other measures such as crop diversification, resource conservation technologies and micro-irrigation techniques are yet to show substantive results.

For crop diversification, the government constituted two committees (1986 and 2002), popularly known as Johl Committee 1 and 2. But not much has happened on the ground. The Union Government has been advising (without any policy intervention, alternative crops and financial support) Punjab to shift massive area from under paddy. The promotion of paddy in Punjab was mainly due to the policy mix (focused on country’s food security). Now, how can we expect crop diversification in the absence of a compatible policy set?

Punjab needs to shift huge area from under paddy. That would require a compatible policy set and support (from the Union and state governments) and an alternative crop combination (with MSP and assured market clearance) which could give farmers at least the same amount of per-hectare returns which they are getting from paddy. The free power to agriculture would have to be rationalised if we really want to address the issue of diversification and depleting water table. It would not be possible without bringing farmers on board. There is a need to have a social movement by the farmers for rationalisation of free electricity and reducing area under paddy.  It is of utmost importance for having sustainable agriculture, ensuring livelihood, saving water for future generations and saving Punjab from the looming desertification.

Generating awareness among the stakeholders is a sine qua non for mobilising any social movement for addressing the issue of water scarcity. Harvesting and conservation of water (through the mantra of Reduce, Recycle and Reuse) must be made mandatory.  In my own empirical study of 10 districts of Punjab, I found little or no awareness (about depleting water table, wastage and injudicious use of water, harvesting and conservation) among farmers, domestic water users and industrialists.

The state needs to have comprehensive agriculture and water policies, organically linked with each other, as 97 per cent of the groundwater is being used in agriculture. The constitution of the Punjab Water Authority would also play a significant role in supporting and supplementing the government’s efforts in addressing the emerging water crisis.

The author is a professor at CRRID (Centre for Research in Rural & Industrial Development), Chandigarh. Views are personal.