Jhajjar: The Image Management Professionals Association (IMPA), Delhi Chapter, has taken an initiative to bring about a gradual and positive change in the lives of prisoners in the district jail at Dulina village in this district. 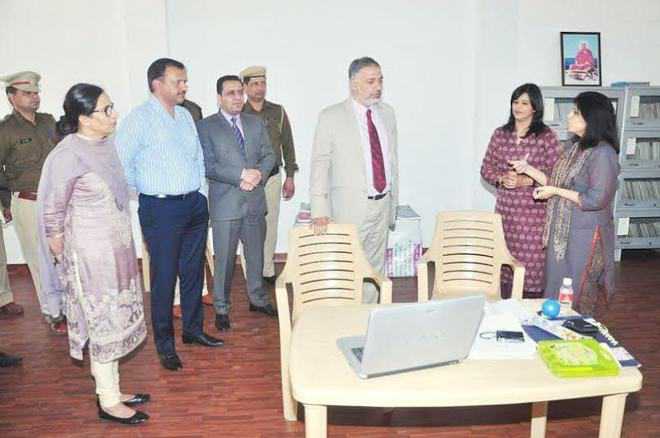 Jhajjar: The Image Management Professionals Association (IMPA), Delhi Chapter, has taken an initiative to bring about a gradual and positive change in the lives of prisoners in the district jail at Dulina village in this district. The IMPA consultants have started counselling the prisoners on their strength and weakness, besides channelising their energy in a positive direction, says Anshu Gupta, President of the IMPA, Delhi.

The IMPA recently organised a workshop in the jail to boost the inmates’ confidence and help them reconstruct their life after their release . Justice Gurmit Singh Sandhawalia who visited the jail on the occasion said: “Prison itself is a tremendous education about the need for patience and perseverance.” Ameeta Nehra, Secretary of IMPA Delhi, underscored the importance of a positive attitude, progressive approach and a balanced mind. “IMPA aims at adding value to the life of prisoners,” Ameeta added.

Jind: Captain Pawan Kumar’s family and Badhana village panchayat has made it clear that if the state government wants to establish an educational institute in the martyr’s memory, it should be set up at the Captain’s ancestral village of Badhana in Jind district . The martyr’s family desires that the government should open either a medical college or a Sainik School in the village, 17 km from Jind.

The martyr’s father, Rajbir, said: “The village panchayat has passed a resolution to give 100 acres or more for the medical institute.” The martyr’s uncle, Subhash Kumar,  said:“As the government is getting 100 acres free of cost at Badhana village,  the government must utilise it for a medical institute instead of purchasing land for the purpose at another place”. Members of the 60-member committee formed  to pursue the case met Governor Kaptan Singh Solanki here on March 21, requesting him to ask the government to set up the proposed institute in the martyr’s village. Capt Pawan Kumar (23), the only son of government teachers Rajbir and Kamlesh Rani, sacrificed his life fighting terrorists in the Pampore area of Jammu and Kashmir on February 21.

Sonepat: As a part of its 36-year-long commitment to helping the needy sections of society, the Manav Seva Trust, Sonepat, on Sunday distributed free of cost 5 kg atta bags among 300 poor persons in the trust office. Founder president of the trust, TC Alakh (76), told The Tribune that the trust had been organising free welfare programmes for the needy and poor people of the district on a regular basis since its inception in 1980.  These programmes included immunisation camps for children, heath check-up camps for diabetic, lever, kidney and dental patients, distribution of books, stationary and dresses among poor students. Besides, the trust had created permanent assets for public use like a community hall, library, community park, a mortuary, cremation ground and a vehicle for carrying bodies to the cremation ground.

Bhiwani: Neetu Singh Bhardwar of Bhiwani district has secured the second rank in the Jharkhand Civil Services examinations in her first attempt. Neetu, who is pursing LL.B from Delhi University, said she was inspired by protagonist Kavita Choudhry of television serial Udaan to join administrative services. Her elder sister is an assistant professor while the other two have MBA and B.Tech qualifications . Neetu’s father, Chaudhry Randhir Singh Bhardwar, is an advocate. Neetu Singh, who is in Delhi, said she had also appeared for an interview for the civil services on March 9.

After being fed up of traffic, Bengaluru man seeks buyers for 3rd, 4th, 5th gears of friend’s car; Internet finds the sarcastic ad too relatable

Pakistani drone with payload shot down in Jammu and Kashmir's Kathua