For now, a sense of ease

The Mamallapuram Summit between President Xi Jinping and PM Modi appears to have cleared the air for improving ties. 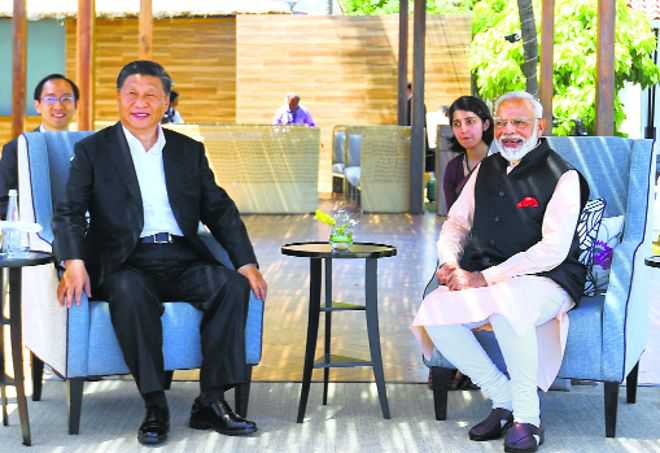 The Mamallapuram Summit between President Xi Jinping and PM Modi appears to have cleared the air for improving ties. This followed the less-than-friendly approach of China in international forums on the issue of J&K in recent days. India and China, however, now appear committed to enhancing mutually beneficial cooperation, bilaterally, regionally and internationally. One can look forward to closer cooperation in forums like BRICS, G20, East Asia Summit hosted by ASEAN, and even in the UN, on issues ranging from global trade to climate change. The Wuhan Summit, last year, had led to an agreement on de-escalation of tensions in the Doklam sector. India and China also agreed in Mamallapuram, to strengthen measures to ensure that tensions do not arise, or get out of hand, across our land borders.

China will, hopefully, take note of the fact that it damaged its own credibility by acting at the behest of Pakistan to internationalise the Kashmir issue. Beijing found itself isolated in the UNSC. Not a single member backed Beijing’s ill-advised move to involve the Security Council in the issue. The British, however, played their characteristically duplicitous role. Chinese efforts to back Pakistan on the Kashmir issue in the UNHRC met a similar fate. Merely three of the 193 members of the UNGA — China, Malaysia and Turkey — voiced their support for Pakistan.

The recent summit was cordial. There was agreement on the path for addressing differences, promoting cooperation in areas like trade and investment, and managing differences that arise periodically across the undemarcated border. There is, however, nothing to suggest that there is going to be any change in China’s efforts to undermine Indian influence across its land borders and in its immediate Indian Ocean neighbourhood. China quietly, but continuously, interferes in the internal affairs of all of India’s neighbours, from the Maldives and Sri Lanka to Myanmar and Nepal. We will have to monitor how China behaves in the prelude to the presidential elections in Sri Lanka next month.

There should be no doubt about continuing military, economic and diplomatic Chinese support for Pakistan. The growing economic woes compel Islamabad to hold out its begging bowl to even distant lands and multilateral aid organisations across the globe. Militarily, however, its navy is set to receive the latest Chinese frigates and submarines.

What seems to be upsetting China presently is not so much India’s relationship with the US, but its blossoming relationship with Moscow. China did not anticipate that defying US sanctions, India would move ahead to acquire S400 air defence missile systems from Russia. Moreover, both Rawalpindi and Beijing did not expect that Russian foreign minister Sergei Lavrov would bluntly tell his bumptious Pakistani counterpart, Shah Mehmood Qureshi, that Moscow would resolutely oppose any move by Pakistan to raise the Kashmir issue in the UNSC. Modi’s visit to eastern Russia and his offer of $1 billion for Indian investment in this sensitive region bordering China, where the Soviet Union and China had a bloody conflict in 1969, has raised concerns in Beijing.

Referring to Modi’s visit to eastern Russia, Chinese government mouthpiece Global Times noted: ‘The advance of India-Russia ties will push the multi-polarisation of international relations and reinforce India’s role in Asia. It will also add the leverage of Russia to counter western pressures on diplomacy and security, empower Russia to effectively resist western countries’ strategic blockade and defend its strategic and economic interests in South Asia. However, stronger Russia-India ties, especially their military-technical cooperation, would have a negative impact on China’s national security. Consolidating and developing ties with Russia implies India’s strategic intention to contain China’s rise. It would pile more geopolitical pressure on China and increase instability in China’s periphery.’

Both China and India have misgivings about many policies of the Trump administration. Beijing realises that after getting a brief respite from Trump’s trade sanctions, there is little more they can expect by way of Trump easing the remaining sanctions he imposed earlier. New Delhi is also not taken in by Trump’s recent bravado in backing the Afghan government, while claiming he would not negotiate with the Taliban. He did this largely due to pressure from both the Pentagon and State Department to stand by the Afghan government. But shortly after the Taliban (obviously under pressure from Pakistan) indicated that it was ready to make peace in Afghanistan, Trump’s envoy Zalmay Khalilzad rushed to Islamabad to get the Taliban to observe a ceasefire and resume talks.

Trump is also appeasing anti-war sentiments in the US by withdrawing US forces from Syria. He hopes that Imran Khan will help him get a face-saving withdrawal by persuading the Taliban to agree to a ceasefire. He will then claim that he has pulled out US troops from all unproductive military engagements abroad by ensuring they are all safely home, well before the election day — November 3, 2020. How all this plays out, in the midst of impeachment proceedings that Trump is facing in the opposition-dominated House of Representatives, remains to be seen. If Imran Khan thinks that the US will be eternally grateful for helping them, he would be seriously mistaken.

Modi can derive satisfaction from the fact that despite Chinese actions and Sino-Pakistan collusion, India has successfully ridden the storm of external pressures after the revocation of Article 370. New Delhi can now move ahead to fulfil its commitment to maintain the country’s strategic autonomy. The recent measures for improving the daily lives of people in Kashmir by the restoration of telephone links will hopefully be suitably followed up by further measures to restore normalcy in the Valley.