Govt blames Haryana as it struggles to tame Ghaggar

CHANDIGARH: The state government has blamed Haryana for the damage caused in Patiala and Sangrur districts due to the overflowing Ghaggar. 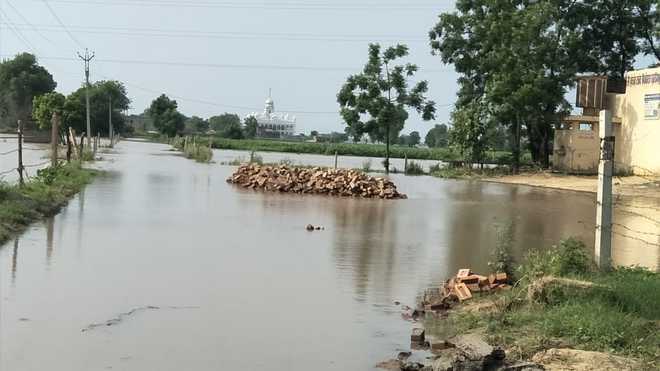 The state government has blamed Haryana for the damage caused in Patiala and Sangrur districts due to the overflowing Ghaggar.

The state has pointed out that timely channelisation of the 17.5-km stretch from Makror Sahib to Karail by the Punjab’s Drainage Department could have saved marooning of several areas along Ghaggar’s embankments, but Haryana did not allow it.

Sensing gravity of the situation and loss suffered by farmers, Chief Minister Capt Amarinder Singh has decided to take up the issue with the Centre. “The misery of the people due to flooding needs to be addressed at the earliest, rising above political differences on water sharing,” said a senior official in the CMO.

The state’s Drainage Department has requested the Central Water Commission (CWC) to depute its officials to visit the affected areas to get first-hand information on the necessity to undertake the pending channelisation work.

Chief Engineer (Drainage) Sanjeev Gupta said, “I have requested the CWC to visit the flooded areas. This would allow us to explain the need to carry out channelisation as per the recommendations of the study conducted by Irrigation and Power Institute, Amritsar.”

The state has sought strengthening of the embankments raised by villagers from Makror Sahib to Karail. The damage to villages due to swollen Ghaggar has once again brought to the fore the tussle between Punjab and Haryana over water sharing.

While Haryana wants release of water in the Hansi-Butana canal, it is notletting the Punjab Government channelise the Ghaggar near Khanauri on the interstate border.

The river had caused huge damage in Patiala, Sangrur and Mansa districts in 1988, 2010 and 2015. This year too, the river has been in spate due to incessant rains, creating havoc in numerous villages.

What is neighbouring state’s objection?