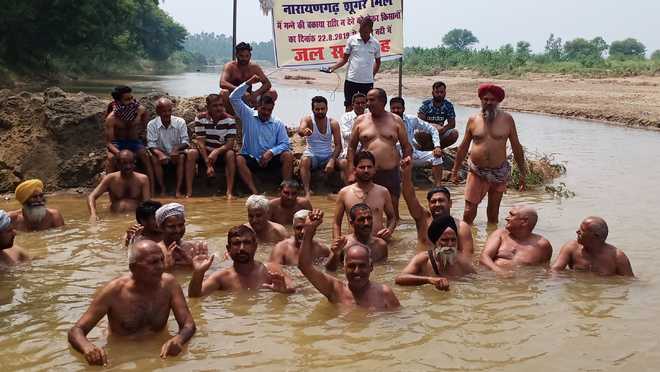 Farmers protest on the banks of the Begna river in Naraingarh on Saturday. Dev Dutt Sharma

Farmers, however, were unmoved by the formation of the committee. They continued their protest on the banks of the Begna river for the third consecutive day on Saturday.

They said they had lost faith in the government as their grievances had remained unaddressed for more than seven months. “This time, we will not relent and will continue our protest till we are paid our money,” one of the farmers said.

Having removed their clothes as a mark of protest, farmers have been raising slogans against the mill management. They have threatened to step up the agitation if their dues are not cleared immediately.

When contacted, a mill spokesperson said the management was trying hard to arrange funds and get its dues cleared from the state government. “As soon as the government pays us, we will clear farmers’ dues,” he added.

Former CM Bhupinder Singh Hooda on Saturday called the BJP government ‘anti-farmer’ for not clearing the dues of sugarcane farmers, who are protesting in Naraingarh for eight months. Hooda said, “The BJP, in its election manifesto, had promised farmers that they would get their payments within 24 hours, but the party has not kept its promise.” TNS