After Assam, NRC will be implemented in Haryana, says Khattar

CHANDIGARH: After Assam, Haryana Chief Minister Manohar Lal Khattar on Sunday announced that the National Register of Citizens will be implemented in the state. 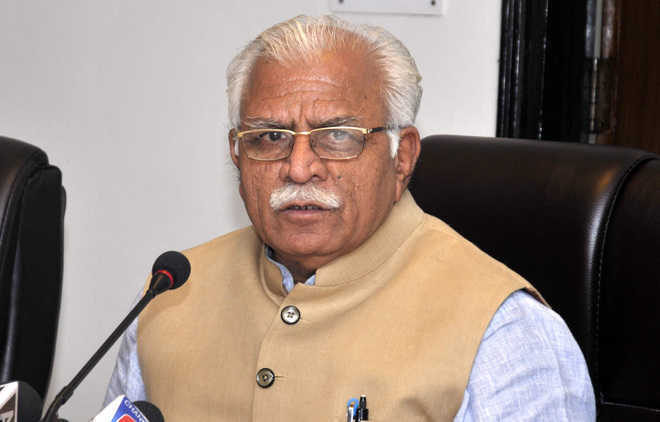 After Assam, Haryana Chief Minister Manohar Lal Khattar on Sunday announced that the National Register of Citizens will be implemented in the state.

Besides this, constitution of a Law Commission is also being considered in the state and an independent department would be set up to solicit the services of intellectuals, he said.

Khattar met them as part of his party’s “Maha Sampark Abhiyan” ahead of state polls in October.

He had previously too supported NRC implementation across the country.

“When we meet, the talk revolves around how to take the country forward and other such issues,” he said.

He said Justice Bhalla has taken up many assignments after his retirement, including heading the state human rights commission.

“These days he is also working on NRC and will visit Assam soon. I have said (to Justice Bhalla) that we will implement NRC in Haryana and have sought Bhalla ji’s support and suggestion,” he told reporters outside Justice Bhalla’s residence.

On August 31, the final NRC in Assam was released, leaving 19 lakh people out.

The process of NRC update was started in Assam following a Supreme Court order in 2013 and since then, the apex court has closely monitored the entire process.

However, several political parties, including the BJP in the north-eastern state, have voiced their dissatisfaction with the final document.

On Sunday, Khattar also said the Haryana Government will look into the feasibility of setting up a Law Commission.

“He (Justice Bhalla) suggested that a Law Commission should be set up in Haryana. We shall study it and examine this too. The government will look into the feasibility of setting up of this commission and if people get benefitted with it, it will be set up,” Khattar said.

An official release, quoting the chief minister, said the state government is working on a “parivar pechchan patra” (family ID card). Khattar said its data would be used in the NRC.

Khattar said the BJP government has been transparent and worked honestly for the last five years.

He said he treats the 2.5 crore population of the state as his family and his government had taken various initiatives for the benefit of the society. — PTI