CHANDIGARH: India Today-Axis My India exit poll predicted a hung assembly in Haryana on Tuesday—the only exit poll that did not give the ruling Bharatiya Janata Party a landslide win. 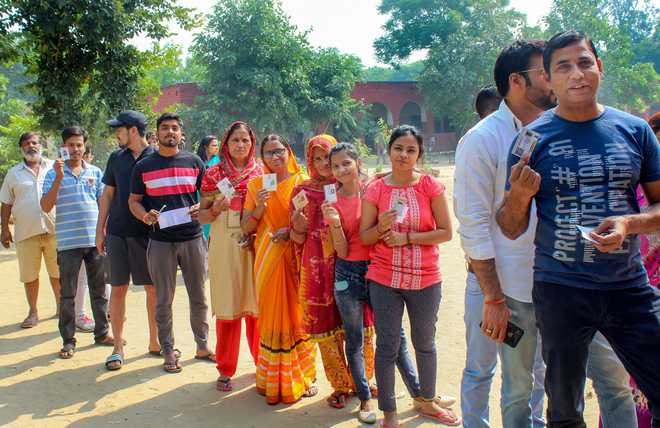 Voters stand in a queue to cast their votes at a polling station during Haryana Assembly elections in Gurugram on October 21, 2019. PTI file photo

India Today-Axis My India exit poll predicted a hung assembly in Haryana on Tuesday—the only exit poll that did not give the ruling Bharatiya Janata Party a landslide win.

India Today, which shared the exit poll for Haryana only on Tuesday, a day later than most of its rivals, predicted 32-44 seats for the ruling BJP, 30-42 for the principal opposition Congress, 6-10 for the Jannanayak Janata Party and 6-10 for others, which includes the Indian National Lok Dal.

India Today’s Rajdeep Sardesai said in his tweet: “The Axis My India exit poll shows that Jats have consolidated behind Cong and JJP. If Jat vote splits, BJP will be ahead even now. If it doesn’t, BJP will be in trouble. Seems too close to call. Dalit vote now key. Remember BJP got 58 per cent Haryana vote in LS”.The halfway mark in the 90-member assembly is 46. BJP won 47 seats in the 2014 assembly elections".

Most other exit polls gave BJP a comfortable majority.

Voting for both Haryana and Maharashtra assemblies were held on Monday. Votes will be counted on Thursday.

The poll of polls gave the BJP and the Congress 66 and 14 seats, respectively, in Haryana.

Voting for both Haryana and Maharashtra assemblies were held on Monday. Votes will be counted on Thursday.