Haryana told to identify, shut units polluting Yamuna at once

PANIPAT:Untreated industrial waste is polluting the Yamuna in Yamunanagar, Panipat and Sonepat districts, says a report of the Yamuna Pollution Monitoring Committee constituted on the directions of the National Green Tribunal (NGT). 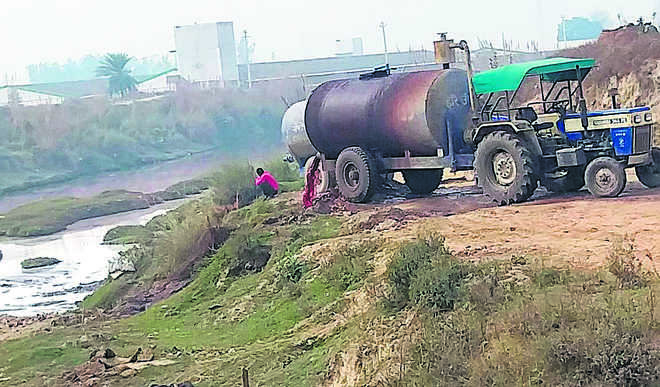 A tanker releases industrial waste into a Yamuna drain in Panipat.

Untreated industrial waste is polluting the Yamuna in Yamunanagar, Panipat and Sonepat districts, says a report of the Yamuna Pollution Monitoring Committee constituted on the directions of the National Green Tribunal (NGT).

A joint team of the CPCB and the Central Council for Industrial Research (CSIR)-National Environmental Engineering Research Institute (NEERI) had inspected the quality of Yamuna water at various locations in all three districts and found that industrial waste was being directly released into the river without treatment.

The team monitored water quality at Wazirabad in Delhi, Palla village in Sonepat, Panipat, Yamunanagar besides drains — Ditch drain, Panipat drain, drain No. 8 at Sonepat and drain No. 2 at Panipat — from December 24 to 27 last year without informing HSPCB officials.

The teams assessed and identified the sources of pollution during the period and prepared the report, said the sources.

The team observed that the Yamunanagar drain, Panipat drain and drain Nos. 2, 6 and 8 carried untreated waste water of various industrial units located in the three districts.

The river water failed to meet the primary criterion — bathing water quality standard — at all monitored locations, said the sources.

Following the report, the CPCB Chairman has directed the HSPCB to identify and shut non-complying industrial units in the three districts with immediate effect.

It has also directed the HSPCB to submit a compliance report to the CPCB within two months.

Around 400 registered dyeing units are operational in Panipat, of which 300 alone are in Sector 29 part-2. Another 200 dyeing units are being run illegally in the district. As per HSPCB officials, 350 units are registered under the ‘red’ category, 220 under ‘orange’ and 25 under ‘green’ category.

The maximum number of erring units falls in Sanoli and Bapoli areas that directly release industrial water into the Yamuna, say sources. The CPCB had issued closure notices to 70 industrial units in Panipat under the Environmental Protection Act last year.