Due to HC verdict on Jat quota, Rohtak police, admn on alert

ROHTAK: The district administration and police are on alert as the verdict on the validity of the Haryana Backward Classes Act, 2016, is likely to be delivered on Friday. 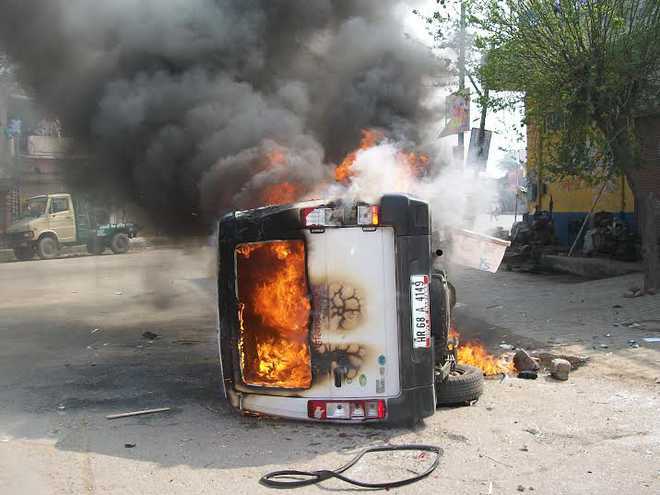 There was a lot of violence during the Jat agitation. Tribune file

The district administration and police authorities are on alert as the verdict on the validity of the Haryana Backward Classes (Reservation in Services and Admissions in Educational Institutions) Act, 2016, is likely to be delivered by the Punjab and Haryana High Court on Friday.

The verdict is being eagerly awaited as the provision of reservation to the members of the Jat, Jat Sikh, Muslim-Jat, Bishnoi, Ror and Tyagi communities depends on it. The said Act, passed by the Haryana Assembly in March, 2016, provided reservation to the aforesaid communities under a newly created BC (C) category.

The agitation for grant of reservation to Jats launched from Sampla township in Rohtak district had turned violent in February 2016 and led to widespread arson, loss of lives and damage to property across the state.

A massive statewide agitation had been staged in Haryana in January-February this year as well, the epicentre of which was Jassia village in Rohtak district.

In view of the aforesaid facts, the Rohtak district administration and police authorities are on alert and closely monitoring the developments.

“The police and administration are on an alert in view of the situation. We are committed to maintaining peace, law and order,” said Rohtak Deputy Commissioner-cum-District Magistrate Atul Kumar.

Local SP Pankaj Nain maintained that they were monitoring the situation and keeping a close vigil on the goings-on.