Illegal bundhs & passages back, mining in Yamuna on

YAMUNANAGAR: Mining contractors have reportedly again constructed unauthorised bundhs and makeshift passages in Pobari, Gumthala and other villages of Yamunanagar district to undertake mining activities in the riverbed of the Yamuna. 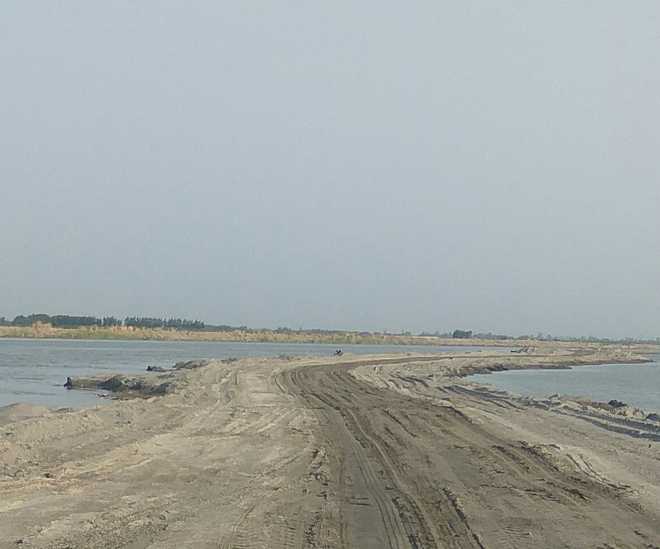 The administration had destroyed five makeshift passages and several bundhs at several villages across the river last month.

Mining contractors have reportedly again constructed unauthorised bundhs and makeshift passages in Pobari, Gumthala and other villages of Yamunanagar district to undertake mining activities in the riverbed of the Yamuna. Illegal bundhs and makeshift passages are diverting the natural flow of the Yamuna. Sources said illegal mining was being undertaken in the villages, causing huge environmental damage to flora and fauna in and around the riverbed.

The administration had destroyed five makeshift passages and several bundhs at several villages across the river last month. On the complaint of officials of the Irrigation and Water Resources Department, four mining companies were booked on June 5 for causing blockage in the Yamuna by constructing unauthorised bundhs on the river in Gumthala, Sandhali (Nagli), Pobari and Modeltown Karera villages to undertake mining activities.

These actions came after a team of the Delhi Jal Board visited Tajewala and other places in Yamunanagar district on May 3 and saw a bundh being prepared in the river in Kanalsi village.

The Delhi Jal Board team had come here as the authorities were scheduled to submit a report in the Delhi High Court in connection with a writ petition on May 8 regarding the position and quantum of river flow at Tajewala.

The sources said mining companies had again constructed unauthorised bundhs and makeshift passages in Pobari, Gumthala and other villages and started mining activities in the riverbed.

It was alleged that officials of various departments of the administration visited the area from time to time, but did not take action against violators.

Waryam Singh, president of the Haryana Anti-Corruption Society, said mining companies had again constructed unauthorised bundhs at Pobari, Gumthala and other villages, which was in violation of court orders and guidelines of the NGT to save the natural flow of rivers.

Vinod Kumar, Executive Engineer, Water Service Division, Jagadhri, said if any bundh or makeshift passage was found, stringent action would be taken against the guilty.