ROHTAK: Former Chief Minister and veteran Congress leader Bhupinder Singh Hooda has maintained that the debt on the state, which was nearly Rs 70,000 crore when the BJP regime took over the reins of Haryana in 2014, has now reached around Rs 1.70 lakh crore. 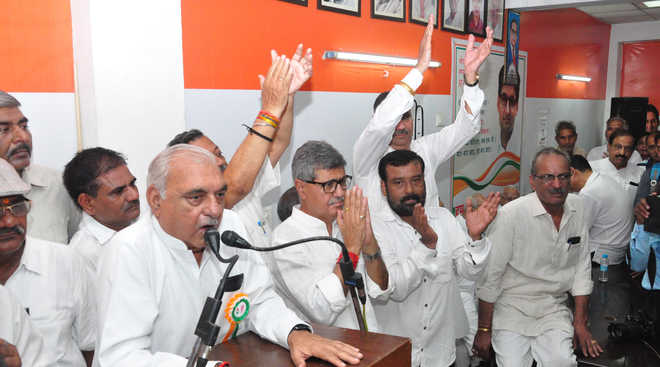 Former Chief Minister and veteran Congress leader Bhupinder Singh Hooda has maintained that the debt on the state, which was nearly Rs 70,000 crore when the BJP regime took over the reins of Haryana in 2014, has now reached around Rs 1.70 lakh crore.

“The BJP government has put Haryana under a massive debt burden, even though it has not carried out any substantial development during its five-year tenure. It has only organised events, made tall promises and hollow claims of progress,” Hooda said while addressing a meeting of Congress workers here today to mobilise support for Bharat Bhushan Batra, the party’s nominee for the Rohtak seat.

The Congress leader lambasted the BJP regime, stating that it had hatched a conspiracy which led to riots during the Jat agitation for reservation.

“Even the Prakash Singh Committee constituted by the state government had held the top government functionaries responsible for the riots. However, instead of taking any action against the culprits, the government junked the committee’s report,” Hooda stated.

He also castigated the BJP government for preferring the applicants of other states in selections for cushy jobs and giving jobs of peons and water-carriers to highly educated youth of Haryana, terming it as a cruel joke with the state’s jobless youth.

“I demand a White Paper from the state government on the number of jobs granted during its tenure and the number of applicants who did not join the jobs or left them,” said the two-time Chief Minister.

Winning the Rohtak seat is quite crucial for the Congress, especially Hooda, as the party had lost it in the last Assembly elections. The other three Assembly seats of falling in Rohtak district were won by the Congress last time.