HISAR: For Krishna Poonia (36), politics is like sports which, too, require enough patience and a lot of hard work for a positive outcome. 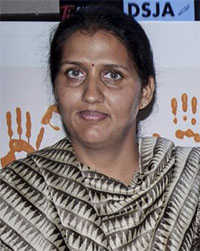 For Krishna Poonia (36), politics is like sports which, too, require enough patience and a lot of hard work for a positive outcome.

A former discus thrower, who became the first woman to won a gold medal for the country in track and field in the 2010 Commonwealth Games, Krishna tasted success in the political ground in her second attempt in the Rajasthan Assembly elections.

A native of Bidhwan village in Siwani subdivision of Bhiwani district, Krishna’s family later shifted to Agroha town in Hisar district. She got married to Virender Singh Poonia, a coach in Gagarwas village of Churu district in Rajasthan. Virender spotted her talent and told her to continue her studies as well as sports.

Her career took a turn when she won a bronze in the 2006 Doha Asiad. Later, she won a gold in the 2010 Commonwealth Games and a bronze in Guangzhou Asian Games the same year. She had represented the country in the 2012 London Olympics.

In 2013, Krishna joined the Congress in the presence of Rahul Gandhi. At that time, she was in the middle of her sports career. She was fielded from the Sadulpur seat in Rajgarh district in the 2013 elections, but came the third. However, this time she has defeated her rival, BSP candidate Manoj Nyangali, from the same seat by a margin of 1,80,084 votes.

Rohtak MP Deepender Singh Hooda had also campaigned for her in the Sadulpur segment, which is located close to Siwani town in Haryana. Krishna’s neighbours in Bidhwan village — Krishan Varma, Shiv Kumar Sharma, Madan Sheoran — said they were happy that she had won the electoral battle.“We hope that she will be inducted in the ministry with sports portfolio. She is hardworking and has a concern for sports,” said Krishan who, along with other villagers, had also campaigned for her.

While talking to The Tribune recently, she had owed her success to her husband, who always encouraged her to continue sports even after marriage. Her son was nine-year-old when she had won a gold in the 2010 CWG Games. She had to stay away from her son for two years to prepare for the games.