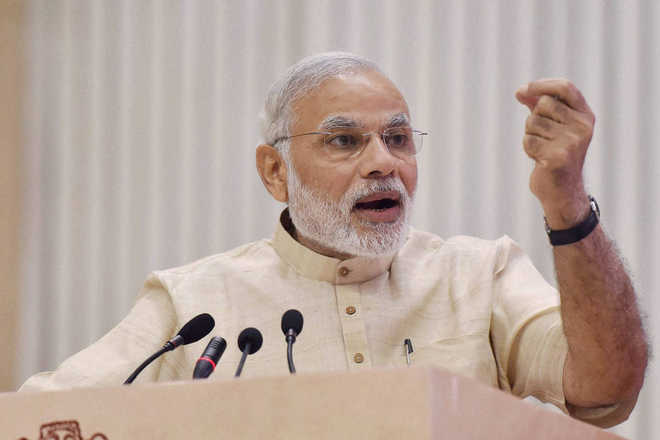 He also inaugurated the 3.2 km-long Ballabhgarh-Mujesar Metro rail link, which would facilitate travel for people of Delhi and Faridabad, and laid the foundation stone of the Shri Vishwakarma Skill University, which will come up at Dudhola in Palwal district.

The inaugurations and foundation-laying stone ceremonies were done through remote from Sultanpur village of this district.

The Prime Minister, on his arrival at Sultanpur village in this district, went around a visual art exhibition pertaining to the KMP project. Modi was briefed by the officials about the project.

He was accompanied by Chief Minister Manohar Lal Khattar, Union ministers Rao Inderjit Singh, who is a Gurugram MP, and Birender Singh.

Earlier this year, Manesar to Palwal stretch of the KMP, whose entire length is 135.65 km, was opened for public, Khattar said on the occasion.

A sum of Rs 6,400 crore had been spent on the expressway project and 3,846 acres of land was acquired at a cost of Rs 2,788 crore, a Haryana government spokesperson said.

The length of the stretch from Kundli to Manesar is over 83 km. This stretch would have 14 major or minor bridges, 56 underpass or agricultural vehicular underpasses, seven intersections and seven toll plazas.

The expressway will decongest the road traffic from Delhi, especially reducing the number of trucks entering the national capital, thus helping in reducing pollution.

Besides, the project will also provide high-speed link between northern Haryana and southern districts and give uninterrupted high-speed link for traffic, especially commercial traffic, from Haryana to neighbouring states.

The BJP government in Haryana has blamed the previous Congress government of delay in the KMP project.

The Prime Minister inaugurated the Rs 580 crore Metro link in Sultanpur village in the district.

Ballabhgarh becomes the fourth city in Haryana to get metro connectivity after Gurugram, Faridabad and Bahadurgarh.

The skill university will come up over an area of 82.5 acres at a cost of Rs 989 crore.

The Congress on Monday accused the BJP-led central government of endangering the lives of commuters by inaugurating an "incomplete" expressway in Haryana for quick publicity during elections.

"PM Modi and CM Khattar are endangering the lives of thousands of commuters by illegally and forcibly inaugurating an incomplete KMP Expressway today.”

"Will Modi-Khattar duo answer - No testing of KMP by engineers, illegally called as Partial COD (Commercial Operation Day); 3rd party consultant has refused to give 'completion certificate' and even HSIIDC refused to own responsibility for any mishap.

"Are you risking commuter lives only for quick publicity in the middle of elections and to benefit the private operator by Rs 26 crore a month (sic). Modiji, you should cancel the inauguration, order an enquiry and get the KMP completed," he said in a series of tweets.

Earlier in the day, the prime minister inaugurated the Kundli-Manesar section of the Kundli-Manesar-Palwal (KMP) Western Peripheral Expressway and blamed the previous Congress government in Haryana for the delay in its completion.

Earlier this year, the Manesar-to-Palwal stretch of the KMP Expressway, the entire length of which is 135.65 km, was opened for the public, Haryana Chief Minister Manohar Lal Khattar said on the occasion.

The length of the Kundli-Manesar stretch of the expressway is over 83 km. This stretch will have 14 major or minor bridges, 56 underpasses or agricultural vehicular underpasses, seven intersections and seven toll plazas. The expressway will decongest the road traffic from Delhi, especially reducing the number of trucks entering the national capital, thus helping in reducing pollution. PTI