CHANDIGARH: With rice millers owing over Rs 300 crore to the state government since 2011 and the police allegedly soft in nearly 95 FIRs against them, the government on Tuesday decided to get tough with them by constituting special investigation teams (SITs) to bring the unscrupulous millers to book. 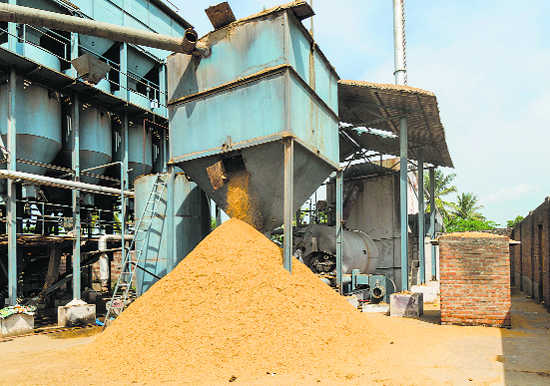 With rice millers owing over Rs 300 crore to the state government since 2011 and the police allegedly soft in nearly 95 FIRs against them, the government on Tuesday decided to get tough with them by constituting special investigation teams (SITs) to bring the unscrupulous millers to book.

A decision to set up SITs in Ambala, Kurukshetra, Karnal, Kaithal and Yamunanagar districts of the state where a majority of the defaulting rice millers are based was taken today at a meeting headed by Food, Civil Supplies and Consumer Affairs Minister Karan Dev Kamboj.

The department’s Additional Chief Secretary Ram Niwas, Director Sanjeev Verma and other senior officials were present on the occasion, while the ADGP (Law and Order) Mohammad Akil represented the police.

Sources said the amount of Rs 300 crore was merely the cost of custom-milled rice these millers owed, but since the government also charged interest and penalty and the defaults were from 2011 onwards, the actual amount was much more than this.

Sources said one such FIR, lodged against a Pehowa (Kurukshetra)-based miller who defaulted in delivering 957 MT rice worth Rs 1.87 crore, dated back to 2011.

In 2012, another mill from Kurukshetra defaulted in delivering 1609 MT rice worth Rs 3.58 crore belonging to the government.

As many as 38 FIRs were registered in 2013 against as many millers from Ambala, Yamunanagar, Kurukshetra, Karnal, Kaithal and other districts and the defaulting amount in these cases was more than Rs 85 crore.

The defaulting amount of these millers ranged between a little over Rs 1 crore and Rs 8 crore per miller.

Sources said though FIRs are registered against these dealers since 2011, the police had been soft against them.

In many cases, the police failed to arrest them and in others, millers got bail because the police did not file challans in courts.

Under the custom milling of rice (CMR), various procurement agencies of the government supply paddy to millers against which the miller has to deliver 67 kg of rice for every quintal of paddy he gets.

The government pays Rs 10 per quintal as milling charges to the millers, besides paying transportation charges for bringing paddy to his mill and rice to the warehouses of the government.

Along with this, the miller also gets for free the husk, rice bran and “nakku” (broken corners of rice which is ground and used as flour for dosas), which are the byproducts of the CMR process.

The Tribune has learnt that from every quintal of paddy, 67 kg rice is derived, nearly 20 kg husk is generated, 7 kg of rice bran is produced and 2 kg of “nakku” is also left with the millers.

Despite this, several unscrupulous rice millers fail to deliver rice to the government and fraudulently sell it in the open market in criminal breach of trust.

In many cases, connivance of senior officials of the department has also come to the fore and action has also been taken in some cases.