A Palwal village leads in development

Nangla Bhiku village in Palwal district may seem to be a non-descript village but instead it has become popular for its development works. 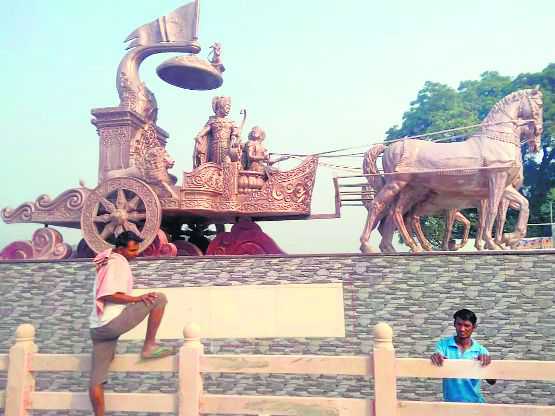 A replica of Mahabharata time chariot driven by Lord Krishna at the main chowk of Nangla Bhiku village in Palwal district.

Nangla Bhiku village in Palwal district may seem to be a non-descript village but instead it has become popular for its development works. It has emerged as a champion of development in the past few years.

The state Panchayats Department has adjudged it as one of the ‘six star’ villages under the prestigious ‘Seven Star Indradhanush’ Yojana. The state government had launched the scheme last year to promote speedy development in rural areas. Nangla Bhiku has set an example in rural development. Besides Nangla Bhiku, Janacholi and Jainpur villages, also in Palwal district, have got this award. A total of 1,120 villages of the state took part in the competition. The winners received a cash prize of Rs 6.5 lakh each.

Nangla Bhiku village Sarpanch Rajender Tewatia (31) says that he took up the development task as a mission, as he wanted his village to be known across the country. “The Super Village Challenge Competition launched by the district administration under the guidance of then Chief Minister’s Good Governance Associate (CMGGA) Abhinav Vats and Deputy Commissioner Mani Ram Sharma provided the much-needed impetus, and the village panchayat was able to take up various projects on priority in the time frame. “We worked vigorously on education, environment, cleanliness and development of basic infrastructure. This resulted in Nangla Bhiku getting the top position in the first phase of the Super Village Challenge programme launched at the district level in 2017,” he says. The authorities concerned gave away a reward of Rs 8 lakh to the village.

However, the greatest moment of pride for the village came on April 24, 2018, when the gram panchayat was awarded the national level Deen Dayal Upadhaya Panchayat Sashaktikaran Puruskar for 2016-17 for its outstanding efforts. Union Minister for Rural Development Narendra Singh Tomar gave away the award.

Tewatia says that the village maintains the top position even in the second phase of the Super Village Challenge programme at present. The programme is being organised under the direction of present CMGGA Zishan Khan and its results are likely to be declared in February 2019.

Zishan says that it is a unique programme and the number of panchayats taking part in the competition has gone up from 55 to 120 this time. It is based on efforts made on various parameters such as gender ratio, education, hygiene, environment, governance and social participation.

While all streets in Nangla Bhiku village are of concrete with covered drains, the school, chaupals, streetlights and the entry gate are solar-powered. There is sewerage in the village, and it is perhaps one of the few villages in the state to have an independent Wi-Fi network and CCTV cameras. “I spent Rs 11 lakh, which I had saved after my marriage in 2010, on the development of the village,” says the sarpanch. Tewatia, a graduate, says that all buildings have solar power and the use of polythene bags in the village has been banned. A replica of a chariot carrying Lord Krishna and Arjuna from the Mahabharata epic near the main chowk of the village welcomes visitors. Dustbins have been provided at every nook and corner of the village and a signage guides visitors.  “I intend to develop it as the best village in the country,” adds Rajender.