Lt Col Rai Singh Yadav (retired as Brigadier) is remembered in the Indian Army as ‘Nathu La Tiger’, for he, as commanding officer, had joined his men in a scuffle with bayonets and rifle butts to beat back the Chinese from capturing Nathu La on the border northeast of Sikkim in 1967. 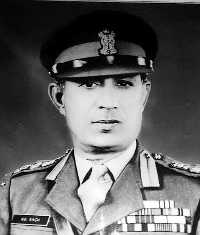 Lt Col Rai Singh Yadav (retired as Brigadier) is remembered in the Indian Army as ‘Nathu La Tiger’, for he, as commanding officer, had joined his men in a scuffle with bayonets and rifle butts to beat back the Chinese from capturing Nathu La on the border northeast of Sikkim in 1967.

Rai Singh, the Nathu La Tiger, son of Rao Ganpat Singh Yadav, was born at Kosli village in Rohtak district of then undivided Punjab on March 17, 1925. Kosli, now a tehsil in Rewari district, has been a nursery of future military officers. Rai Singh passed his Senior Cambridge from King George Military School, Jullundur, and joined the Army as a sepoy in 1944. He was commissioned into 2 Grenadiers on December 10, 1950.

Rai Singh had an analytical mind and rather early in service became apt at discerning the details of military tactics and strategy. As a result, he, as a young Major, was nominated to attend the prestigious year-long Defence Services Staff College course at Camberley in England.

Rai Singh, as Lieutenant Colonel, assumed the command of 2 Grenadiers when the battalion was guarding the Nathu La border out post bordering China in northeast Sikkim. To hold onto the strategic Nathu La pass and thwart the Chinese repeated attempts to encroach upon and capture it, Lt Col Rai Singh led his men from the front and displayed conspicuous bravery and exceptional leadership in the face of the enemy for which he was awarded the Maha Vir Chakra. The summary of his demonstrated exemplary performance is recorded in the War Diary of 2 Grenadiers.

After commanding 2 Grenadiers in most inhospitable terrain and hostile environs, Lt Col Rai Singh, MVC, was posted as General Staff Officer Grade 1 in Military Operations Directorate (MO Dte) at Army Headquarters, Delhi. After a three-year stint at the most sensitive appointment in MO Dte, Lt Col Rai Singh was promoted to the rank of Brigadier. Before superannuating in 1977 in the coveted rank, Brigadier Rai Singh commanded an Infantry Brigade and was also Inspector General (Operations) with the Border Security Force on deputation.

The brief of gallant action in War Diary of 2 Grenadiers reads...

Col Rai Singh was commanding 2 Grenadiers battalion deployed at the Border Outpost (BOP) at Nathu La pass in northeast Sikkim. On August 20, 1967, the battalion was ordered to construct a wire fence along the watershed at Nathu La after the Chinese had intruded the border at the north shoulder, northeast of the BOP. Despite stiff Chinese resistance and use of physical force by them, 2 Grenadiers under command Lt Col Rai Singh successfully completed the task.

On September 7, 1967, the Battalion was again ordered to help Division Sappers and Pioneers to extend the wire fence from the north shoulder to the south shoulder of Nathu La. While executing the task, the Chinese opened fire with their automatics and assaulted the Divisional Engineers and the Pioneers working on the fence. Soon, it turned into a hard slogging match wherein the bayonets and rifle butts were freely used by both sides. Lt Col Rai Singh, who had joined the scuffle, was badly injured. However, the Chinese were overpowered and pushed back and the task successfully completed yet again.

On September 11, when his men were assisting the Engineers and the Pioneers in straightening the wires to prevent trespassing, the Chinese opened fire with artillery, machine guns and mortars. 2 Grenadiers retaliated with all available weapons. When Hav Lakhmi Chand manning his MMG fell, Lt Col Rai Singh himself manned the machine gun and gave covering fire to his men working on the fence to extricate them. When his bunker was damaged by the enemy fire, he came out in the open, and finding a wounded soldier unable to fire, picked up his MMG and engaged the Chinese. But he had fired only a few bursts when he was hit on the shoulder and he collapsed on the spot. Although he was also hit in the head by a splinter when he was being evacuated, yet he continued to give directions and encourage his men to continue fighting. The Chinese fire assault was successfully thwarted by 2 Grenadiers with Lt Col Rai Singh, the Commanding Officer, leading from the front.