Nand Kishore, son of Tirkha Ram Yadav, was born at Dhawana village in present day Rewari district, which is part of the Ahirwal region. 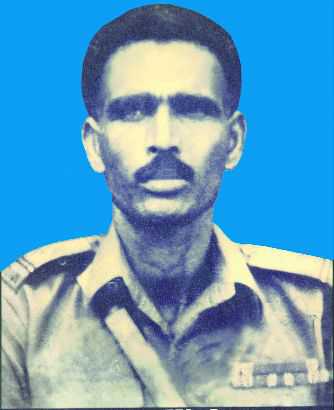 Nand Kishore, son of Tirkha Ram Yadav, was born at Dhawana village in present day Rewari district, which is part of the Ahirwal region. In the 1962 war with China two real brothers from Dhawana village, Sepoy Singh Ram, and his two years’ younger Sepoy Ram Kumar from 13 Kumaon, died fighting side by side in the battle of Rezang La. The elder was awarded Vir Chakra for his bravery.

Nand Kishore could not have formal education since there was no school nearby in the area. Whatever he learnt was in 4th Battalion of Kumaon Regiment in which he was enrolled on July 1, 1939.  Since there is no designated Ahir Regiment in the Indian Army, the Ahirs are mainly absorbed in Kumaon Infantry Regiment, besides logistics and combat support arms. At present, the overall strength of Kumaon Regiment comprises almost 30 per cent of Ahirs from all over India but mainly from north and central India, including  Bihar.

Considering his hard work, camaraderie and grit, Nand Kishore was awarded Junior Commission in the rank of Jemadar in 1961. Two years later, he was promoted to the rank of Subedar (Sub) and was given the command of 3rd platoon of ‘A’ Company in the battalion. As platoon commander, Sub Nand Kishore took Sepoy Tara Chand of his village as his ‘Sahayak’. During the 1965 war with Pakistan, by the end of September, the fighting ended in Poonch and Rajouri sectors but Pakistan-trained guerillas were still active along the ceasefire line in J&K. In some areas, they had entrenched themselves and the Army had to undertake extensive mopping-up operations.

In one such operation, 4 Kumaon was tasked with re-capturing Ring Contour, which overlooked and dominated the main bridge on the Kishanganga river. It was during the second assault and a fierce fight by ‘A’ Company of 4  Kumaon that the objective was captured, a fight in which Subedar Nand Kishore displayed the finest example of camaraderie and raw courage; a fight in which he was martyred but not before his platoon hoisted the National Flag on the majestic Ring Contour. For his conspicuous act of bravery, Sub Nand Kishore Yadav was deservedly awarded the coveted Vir Chakra. The battle account of his gallant act is recorded in the War Diary of 4 Kumaon.

To some, the impulsive reaction of Sub Nand Kishore might appear reckless, but a veteran who has been in the line of fire in the face of the enemy knows how high the emotions run, what camaraderie is all about, mission is all that matters and no price is high enough to pay for its accomplishment. Some people are like that.

As a befitting tribute to the fallen junior leader, ‘A’ company of 4th Kumaon Battalion is referred to as ‘Nand Kishore Company’.

The summary of gallant act in War Diary of 4 Kumaon reads...

On October 11, 1965, Sub Nand Kishore as Platoon Commander led the attack on Ring Contour. As the platoon reached the assaulting distance, it was pinned down by heavy automatic gunfire from the enemy in which Sub Nand Kishore was seriously injured and five of his men, including Tara Chand, his ‘Sahayak’, lay dead. Under the cover of own artillery and mortar fire, the dead and the wounded were evacuated to the Medical Aid Post around 300 yards in the rear. After regaining consciousness, the first thing he asked “Target capture hua”? He was answered in the negative. And then he asked “Aur Tara Chand”? He was told that Tara Chand is dead. Sub Nand Kishore thought for a while, borrowed a pistol from a signaler and without asking the medical officer, hastily limped back to the remaining personnel of his platoon on the front line, mumbling words like “Badla, dhava, kabza” (revenge, assault, capture) as he moved ahead. With heightened emotions and utmost fury, he rallied his men for the final assault. Seeing that a Browning machine gun was holding the assault, and assuming that the same gun killed his men, including his ‘Sahayak’, he called forward a rocket launcher. Despite a wounded shoulder, he fired two rockets and blasted the enemy’s machine gun and then joined the dash to the objective. Frightened by the fury of the assaulting Kumaonis, the enemy fled. But before the success signal was fired, a burst of indiscriminate firing by the fleeing enemy hit Sub Nand Kishore on the chest and he died instantly.