Don''t eat too much potato chips during pregnancy

SYDNEY: Women should avoid eating too much vegetable oil and potato chips during pregnancy as such a diet may result in an increased risk of pregnancy complications and poor development of the babies, warns a study. 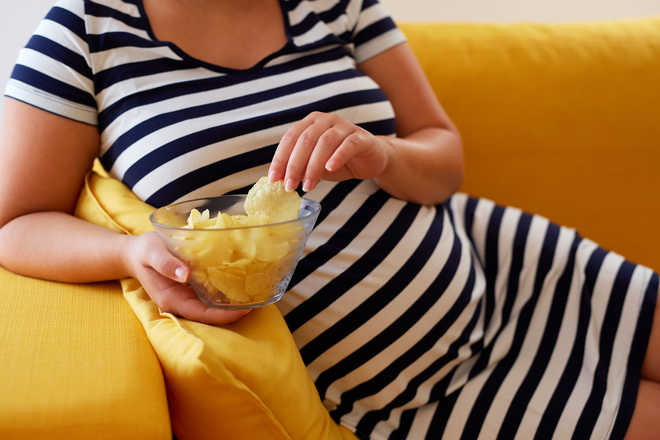 Women should avoid eating too much vegetable oil and potato chips during pregnancy. — iStock

Women should avoid eating too much vegetable oil and potato chips during pregnancy as such a diet  may result in an increased risk of pregnancy complications and poor development of the babies, warns a study.

Foods such as potato chips and vegetable oil contain omega 6 fats, particularly linoleic acid, and the research suggests that overconsumption of this nutrient can promote inflammation and may be associated with an increased risk of heart disease.

"It is important for pregnant women to consider their diet, and our research is yet another example that potentially consuming too much of a certain type of nutrient can have a negative impact on the growing baby," said study lead author Deanne Skelly, Professor at Griffith University in Australia.

The finding, published in The Journal of Physiology, found that eating a diet with three times the recommended daily intake of linoleic acid might be harmful in pregnancy.

For the study, the researchers picked rats for the experiment and they found three changes in rat mothers who ate a high linoleic acid diet: their liver had altered concentrations of inflammatory proteins, their circulating concentrations of a protein that can cause contraction of the uterus during pregnancy were increased, and a hormone that can regulate growth and development was decreased.

If the effects of high linoleic acid are the same in rats and humans, this would suggest that women of child-bearing age should consider reducing the amount of linoleic acid in their diet.

During the study, the research team fed rats for 10 weeks on a diet with high linoleic acid, mated them and then investigated the effects of the diet on their pregnancy and developing babies.

Rats typically give birth to multiple babies in each pregnancy. Rat mothers who ate a high linoleic acid diet had a reduced number of male babies, said the study.

It is important to note that when humans eat a diet rich in linoleic acid, the diet also tends to be high in fat, sugar, and salt.

However, in the study, the only change in the diet was higher linoleic acid, but no changes in fat, sugar or salt. — IANS