WASHINGTON: Reach for the hand of a loved one in pain and not only will your breathing and heart rate synchronise with theirs, your brain wave patterns will couple up too, according to a study. 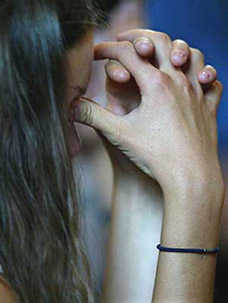 Reach for the hand of a loved one in pain and not only will your breathing and heart rate synchronise with theirs, your brain wave patterns will couple up too, according to a study.

The research also found that the more empathy a comforting partner feels for a partner in pain, the more their brainwaves fall into sync. And the more those brain waves sync, the more the pain goes away.

"We have developed a lot of ways to communicate in the modern world and we have fewer physical interactions," said Pavel Goldstein from University of Colorado at Boulder in the US.

"This paper illustrates the power and importance of human touch," Goldstein said.

The study, published in the journal PNAS, is the first to look at brain wave synchronization in the context of pain, and offers new insight into the role brain-to-brain coupling may play in touch-induced analgesia, or healing touch.

Researchers recruited 22 heterosexual couples, age 23 to 32 who had been together for at least one year and put them through several two-minute scenarios as electroencephalography (EEG) caps measured their brainwave activity.

Merely being in each other's presence, with or without touch, was associated with some brain wave synchronicity in the alpha mu band, a wavelength associated with focused attention.

If they held hands while she was in pain, the coupling increased the most.

The researchers also found that when she was in pain and he couldn't touch her, the coupling of their brain waves diminished.

"It appears that pain totally interrupts this interpersonal synchronization between couples and touch brings it back," said Goldstein. PTI