Arthritis is a medical term for joint pain or joint disease. 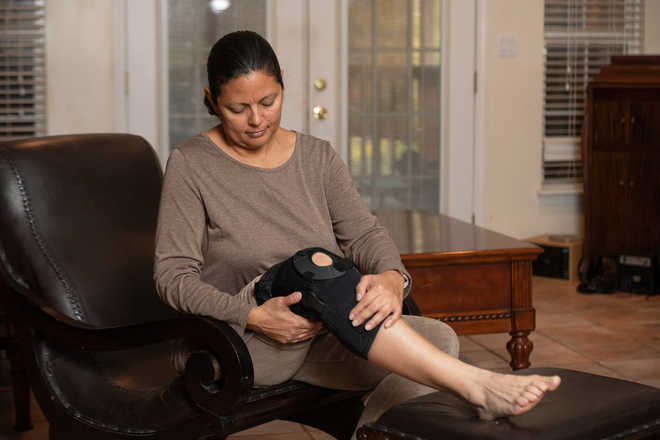 Rheumatoid arthritis, a type of inflammatory arthritis and autoimmune disease, is characterised by chronic joint inflammation

Arthritis is a medical term for joint pain or joint disease. Several people misunderstand the actual meaning of the disease. There are more than 100 types of arthritis which can happen to anyone, irrespective of their age and gender.

The symptoms of the common arthritis are inflammation, swelling, pain, stiffness and decreased range of motion in joints. The intensity could be low, moderate or severe.

Rheumatoid arthritis (RA) — known as gathiya in Hindi — is a dreadful disease that can cripple a person’s life. Rheumatoid arthritis is a type of inflammatory arthritis and autoimmune disease, characterised by chronic joint inflammation. RA can affect the knee, hands, fingers, and feet. This chronic inflammatory disorder can also affect more than just your joints. In some people, it can damage even the skin, eyes, lungs, heart and blood vessels. This autoimmune disorder occurs when your immune system mistakenly attacks body’s own tissues. RA affects the lining of joints. It causes painful swelling that can eventually cause bone erosion and joint deformity.

While rheumatoid arthritis can strike anyone irrespective of their age and gender, it is more common in middle age or old age. The chances of the disease increase with age.

Although men can also get affected by it, its prevalence is higher among women due to hormonal imbalances or hormonal changes they face.

Many women with rheumatoid arthritis go into remission during pregnancy. How hormones influence this disease is still unclear.

Causes of RA in women

Women are more prone to autoimmune diseases such as arthritis and lupus. Hormonal changes happen in women due to menstruation, pregnancy, and menopause. This can increase chances of the disease in women.

Changes in hormone levels may affect the level of proteins in the blood that can raise the risk of inflammation. Environmental and genetic risk factors could also lead to more prevalence of the disease in women.

Female hormones also play a role in the onset of the RA. Hormones such as estrogen, progesterone and androgens influence the development of RA.

Women tend to develop RA at a younger age than men, with symptoms typically appearing between the ages 30 and 50.

Women who have been pregnant are less likely to develop RA than those who have not been. If a woman who has RA becomes pregnant, she may experience fewer symptoms of the disease during pregnancy.

Women have a higher risk of developing RA in the first year after giving birth. This may be due to the rapid change in hormone levels in the body at this time.

Estrogen levels tend to decline after the age of 40. Women have a higher risk of developing RA after 40, and those who experience early menopause are also more at risk. RA that occurs after the menopause may progress more quickly.

Women who have endometriosis may be more at risk of developing RA.

Anti-estrogen medication can help treat infertility, breast cancer, and osteoporosis after menopause. Depending on the dosage, however, this medication may increase a woman’s risk of developing RA.

Around 20 per cent of women who have RA may develop rheumatoid nodules. These are firm, raised lumps underneath the skin.

Since 1995 onwards the incidence (frequency of occurrence) and prevalence (total number of cases in a given population) of rheumatoid arthritis among women is rising. From 1995 to 2005, the incidence of RA among women was 54 per 100,000 compared to 36 per 100,000 for the previous 10 years.

For men, the incidence was stable at 29 per 100,000. Researchers concluded that some environmental factor could explain the reverse in trend for women.

Signs and symptoms of rheumatoid arthritis may include:

It can affect other organs

A large number of patients of rheumatoid arthritis also experience symptoms that don’t involve the joints. It can affect many non-joint structures: