DHARAMSALA: Ogyen Trinley Dorjee, the 17th Karmapa, has been running into controversies since his recognition as the head of the Kagyu Sect and his mysterious escape from Chinese controlled Tibet to India. 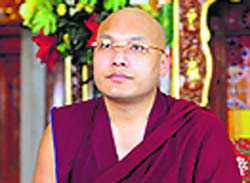 Ogyen Trinley Dorjee, the 17th Karmapa, has been running into controversies since his recognition as the head of the Kagyu Sect and his mysterious escape from Chinese controlled Tibet to India.

Ogyen Trinley Dorjee was born on June 26, 1985, in a nomad community of Bakor in Eastern Tibet. He was recognised as reincarnation of the 16th Karmapa by Dalai Lama in June 1992.

In May 2012, the Himachal government issued directions against referring Ogyen \Trinley Dorjee as Karmapa in an official communcation. The directions were issued in response to a communication by the Una administration in which it had referred to Ogyen Trinley Dorjee as the 17th Karmapa. Shamar Rinpoche had also raised objections.

Later, a third candidate, Dava Sangpo Dorjee, also claimed for the office and title. At present, he is in Nepal. The situation has split up Kagyu followers all over the world.

However, despite repeated pleas from Shamar Rinpoche, Dalai Lama and the Central Tibetan Administration recognised Ogyen Trinley Dorjee as the 17th Karmapa.

Ogyen Trinley Dorjee escaped Tsurphu monastery in Tibet on December 28,1999. He arrived at Dharamsala on January 5, 2000, after trekking about 1,100 kilometres escaping the Chinese Army. Tai Situ Rinpoche, one of the teachers of Kagyu school, reportedly managed the escape of Ogyen Trinley Dorjee from China. He wanted to take him to Rumtek Monastery in Sikkim that is the traditional seat of Karmapas or the Black Hat Lamas in India. The assets of monastery are pegged at Rs 1,500 crore. However, the Union government did not allow Ogyen Trinley Dorjee to move to Rumtek allegedly under the influence of Shamar Rinpoche.

At Dharamsala, Ogyen Trinley Dorjee was kept in Gyoto Tantric Monastery under the vigil of intelligence and security agencies. He was not allowed to move to other parts of the country and foreign countries for many years.

Many doubted that Ogyen Trinley Dorjee could escape from Tibet with the knowledge of the authorities who were keeping an eye on him.

It was only in the last few years that the Indian government allowed Ogyen Trinley Dorjee to travel to other parts of the country and abroad. He still can’t visit Rumtek Monastery.

In January 2011, the Una police caught the driver of a Dharamsala-based businessman with Rs 1 crore. The cash pertained to a land deal between the Karma Garchen Trust headed by Ogyen Trinley Dorjee and the businessman. Following the seizure, the Una police raided the Gyoto Tantric Monastery where the 17th Karmapa had been staying since his escape from China in 1999.

During the raids, the police recovered Rs 6 crore in 26 currencies and Rs 53 lakh in Indian currency from the Gyoto Tantric monastery.