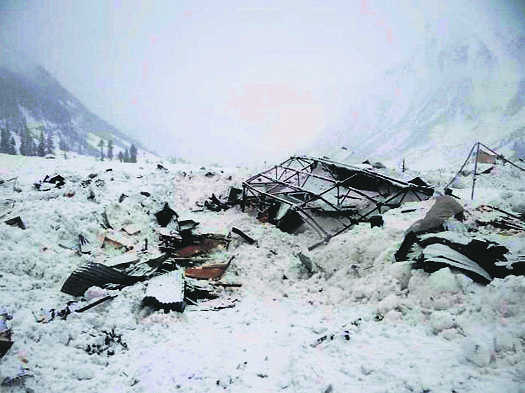 Naik Videsh Chand, Rifleman Arjun Kumar and four other jawans of the 7 Jammu and Kashmir Rifles were buried under the avalanche at Shipki La near the Sino-India border on February 20.

The bodies of two more Army jawans missing since last month following an avalanche in Himachal Pradesh’s Kinnaur district were recovered on Thursday, an official said.

Naik Videsh Chand, Rifleman Arjun Kumar and four other jawans of the 7 Jammu and Kashmir Rifles were buried under the avalanche at Shipki La near the Sino-India border on February 20.

Chand and Kumar’s bodies were recovered on Thursday, 23 days after the incident, he said.

The bodies were taken to Pooh from where they would be sent to their native places, the official said, adding that Chand was a resident of Kharga village in Kullu district of Himachal, whereas Kumar was a resident of Jammu and Kashmir.

Earlier the bodies of four jawans were recovered on separate days.

Havildar Rakesh Kumar’s body was recovered on the day of the avalanche, while the bodies of Rifleman Rajesh Rishi and Govind Bahadur Chhetri and Nitin Rana were recovered on March 2, 4 and 9, respectively.

About 400 personnel and several residents of Khab village carried out the search and rescue operation despite adverse weather conditions, the official said. PTI