SHIMLA: Bull fight at Sair fair in Mashobra, 15 km from here, which had been banned following protests by animal activists, was again organised by the local Mela Committee today after three years. 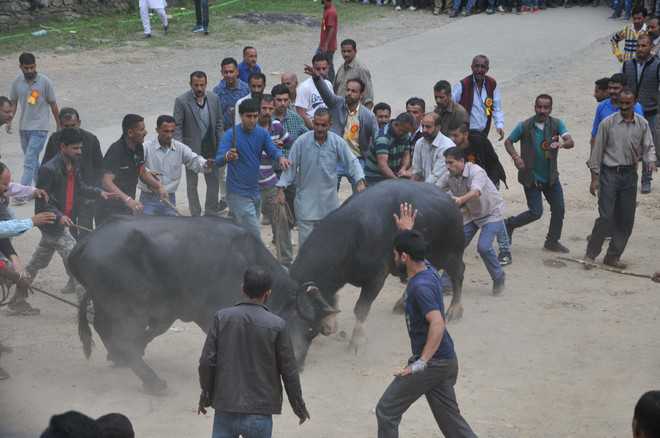 Bull fight at Sair fair in Mashobra, 15 km from here, which had been banned following protests by animal activists, was again organised by the local Mela Committee today after three years. The entry of outsiders and cameras and mobile phones were not allowed.

While many people, including members of a Tribune team, saw the fight, local ASI Kewal Singh, who was on duty in the area, denied that any such fight took place.

There was a standoff between the Mela Committee and the district administration and Shimla Deputy Commissioner Rohan Chand Thakur had told that the FIR would be registered in case of violations.

When asked about the event, the DC said an inquiry had been ordered to ascertain whether the bull fight was held or not. If reports regarding the bull fight turned out to be true, action would take, he added.

Bull fight was popular at Sair Mela celebrated in Arki, Kullu, Mandi and Mashobra in Shimla and thousands of people, including people from other parts of the country, and foreigners thronged Mashobra to witness the fight, which was termed as cruelty against animals by animal activists.

The fair is held in September signalling the end of harvesting and return of Devtas from haven and the onset of winters.

As per the 60-year-old tradition, the bulls are made to consume liquor and they fight violently while people clad in colourful attires, cheer the “fighters”. Cultural programmes was also organised as a part of the fair, which was gradually losing its charm.