Development vanishes whenever Cong comes to power: Rajnath in Solan

SOLAN: Home Minister Rajnath Singh on Monday said development has disappeared whenever the Congress has come to power, while the growth rate was high in the BJP-ruled states in the country. 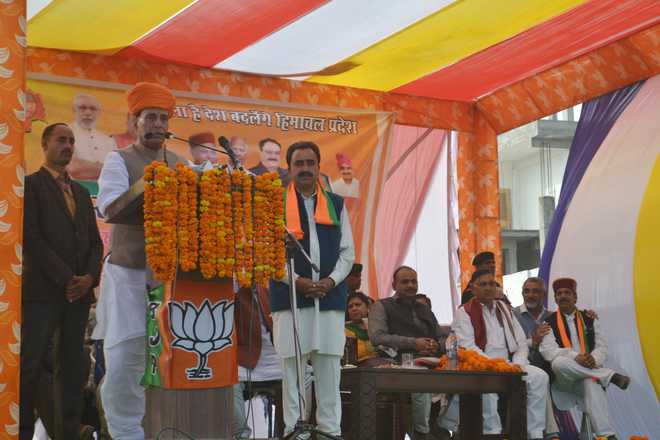 Home Minister Rajnath Singh on Monday said development has disappeared whenever the Congress has come to power, while the growth rate was high in the BJP-ruled states in the country.

Addressing twin poll rallies at Kunihar in favour of BJP’s nominee Rattan Singh Pal and Rajiv Saizal at Parwanoo, Singh said the Congress has lost the morality to remain in power after serious allegations of corruption were levelled against the government. He said people sitting in key places like minister, chief minister and prime minister should not be involved in corruption.

Singh said the border forces have been directed to give a befitting reply to the misadventures of Pakistan and a strong message has been given in the form of surgical strikes to the international community unlike the earlier policy where they could only show white flag for restoring peace and had to take directions to respond.

The home minister praised sitting MLA Govind Ram Sharma for humbly supporting the candidature of Rattan Singh Pal after being denied the party ticket despite being a two-term legislator.

He urged the voters to support Rattan Singh Pal who was son of the soil.

He said he didn’t want to say much about the Chief Minister who was contesting from here but said if he had decided to leave the Sair fair midway, he should have gone from here for good. He wondered why he had then chosen Arki as his political turf.

He said a government which could not ensure the safety of women had no right to remain in power. The Congress government had lost the trust of the voters in 2014 barely two years after coming to power in Himachal as it had lost all four Lok Sabha seats.

Singh said various international agencies had rated BJP for providing best governance and claimed that the growth rate was high in BJP-ruled states like Jharkhand, Chhattisgarh, etc., where road and infrastructure development had made tremendous strides.

Overwhelmed by the crowd present at the rally Singh said they had never fooled masses like the Congress and said several central policies like crop insurance scheme had not been implemented by the state government.

He also recalled the contribution of former prime minister AB Vajpayee as well as the Narendra Modi government where not a single minister was involved in corruption.

He said the growth rate had reached an all-time high during the Vajpayee government and exceptional road expansion had been undertaken during his tenure.

Singh also enlisted the international ranking attained by the country in ‘Ease of Doing Business; and central policies like Jan Dhan Yojana and said they had revolutionised the economy of the poor.

He also took Congress vice-president Rahul Gandhi to task for indulging in poll rhetoric on demonetisation and said his theory had been rejected by the people.

The home minister said the Congress had initiated GST which was now drawing flak from their leaders. “They were indulging in doublespeak and despite having enacted a law on benami properties in 1998 they had failed to implement it.”

He said benami property worth Rs 850 crore had been confiscated by the BJP now. Singh said politics was a means of serving the people for the BJP and not amassing wealth.

The Arki BJP received a shot in the arm with the kin of some congress leaders joining the BJP in the presence of the union minister.

Remarks come amid 'strong speculation' that Kishor would joi...