MANDI: Traffic came to a standstill on the Manali-Leh highway this afternoon as 13,050 feet high Rohtang Pass, gateway to Lahaul, received fresh snowfall. The Pass received 15 cm above snowfall, which blocked the traffic movement completely. 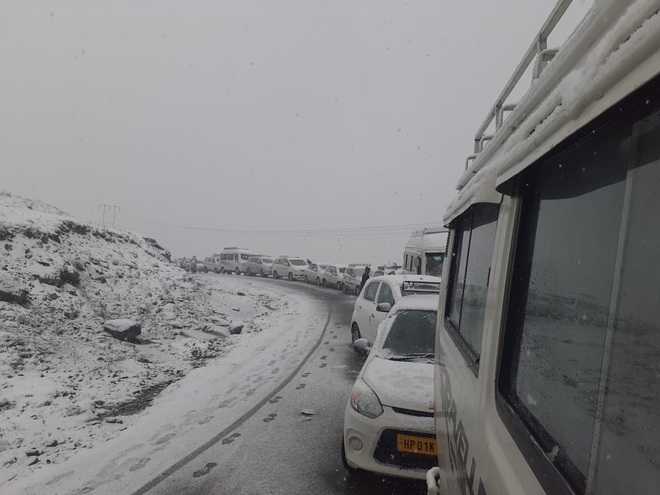 Vehicles move at a snail’s pace.

Traffic came to a standstill on the Manali-Leh highway this afternoon as 13,050 feet high Rohtang Pass, gateway to Lahaul, received fresh snowfall. The Pass received 15 cm above snowfall, which blocked the traffic movement completely.

According to information, lower parts of Kullu and Manali received showers, while the upper hills got fresh snowfall. In view of public safety, the local administration Manali has stopped movement of vehicles on the Manali-Leh highway until the road is cleared for traffic movement by the Border Roads Organisation, whose personnel are engaged in the arduous task of keeping the highway worthy of traffic movement.

Talking to The Tribune, Sub Divisional Magistrate, Manali, Raman Gharsangi said the Pass had received considerable snowfall. Due to that, travelling had become risky on the Manali-Leh highway. Fresh snowfall had also rendered the road slippery.

The SDM has advised tourists and others to refrain from venturing into the area, which may endanger their lives. The SDM said that police had been directed to monitor the movement of vehicles to ensure that nobody violated the directions.

There are reports that high hills of Lahaul Spiti also received considerable snowfall which resulted in drastic dip in the temperature in the region.