Heli-ambulance to cover entire state round the clock

SHIMLA: The free heli-ambulance services likely to be started by a Switzerland based charitable institution Heli Mission will cover the entire state of Himachal Pradesh and not just during the winter months but all through the year. 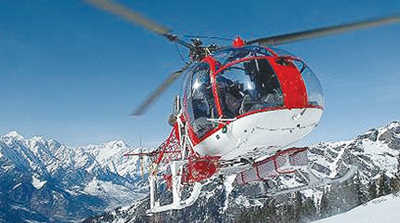 The free heli-ambulance services likely to be started by a Switzerland based charitable institution Heli Mission will cover the entire state of Himachal Pradesh and not just during the winter months but all through the year.

The tripartite agreement will be signed between Department of Health, Heli Mission and the Willingdon Hospital, Manali, shortly for which the Cabinet gave its nod on Thursday. The services will prove to a boon for the people of remote and inaccessible areas as it takes several hours for them to reach to a health institute which can handle the medical exigency.

“We intend to start with one helicopter by the end of this year and after some time it could be increased to two choppers,” revealed Dr Bishan, Community Consultant at the Lady Willingdon Hospital, Manali. He said the Switzerland-based NGO runs the heli-ambulance in several countries in Africa. The heli-ambulance service is being run by the Uttarakhand Government and a team from Himachal visited the neighbouring state to study the service being provided by them.

“The NGO will bear the entire cost of the project and the government will only provide them with land for setting up the hanger for parking of choppers,” said Pankaj Roy, Director, National Rural Health Mission (NRHM). He said to begin with this facility has been provided to them at Bhuntar airport in Kullu temporarily where an unused hanger made for the NCC exists.

Later, a permanent hanger, workshop and office area will be provided to the NGO in Manali. As per the protocol, the call for medical emergency will be made to 108 which will be diverted to the Control Room that will be set up in Manali. It is the team of doctors at the Willingdon Hospital, which will decide whether the patient needs immediate air lifting for critical care.

Moreover, the patient will be airlifted to the health institute where facilities for his treatment are available. This could be even the PGI, Chandigarh or Indira Gandhi and Tanda Medical Colleges at Shimla and Kangra. Normally one chopper trip from Keylong to Bhuntar in Kullu costs about Rs 2 lakh.

So far the only option with the state government to deal with medical exigencies in the far-flung areas, especially in the tribal district, is to tackle them through telemedicine services which have been started for Kinnaur and Lahaul Spiti. The consultation by Apollo doctors have been given at the remotest health centres at Lossar, Korik, Lalung, Hull and Rangrik in these tribal districts.

Patients are also air-lifted through the government chopper service but then that is only for tribal areas in the winter months when the area is under heavy snow cover.